Note:  The Jets kicked off their six-game homestand with a big 6-2 win over division rival Chicago.  The Hawks scored on their first shot of the game just 11 seconds into the contest and then the Jets took over with the game basically being over after 20 minutes.  The win helps to keep the Jets hold on second spot in the Central division.  The team is off today and will return to the ice tomorrow for practice which should prove interesting as both Mark Scheifele and Adam Lowry may use that as a springboard into getting into Sunday’s game against the Stars.

Note II:  As is often the case in this market you won’t be without hockey today as the Moose continue their road trip in Texas.  They left Cedar Park following their 6-3 win over the Stars on Wednesday to head down the I-35 S to San Antonio where they will play the Rampage tonight.  Puck drop is at 7:30 pm at AT&T Center.

NBC Sports:  Josh Morrissey staying healthy while constantly getting in the way.  He is an unheralded player for this Jets squad outside of this market but he makes a huge impact each and every night for Winnipeg.

Winnipeg Sun: Trouba’s return offers big boost, more reinforcements coming soon.  The Jets backend just looks more stable when you have the top pairing Dman in the fold.  Add that news that guys like Scheifele and Lowry are just around the corner and the Jets could have a full team for the stretch run to the playoffs.

Winnipeg Sun:  All four lines get in on the scoring as Jets blast Blackhawks in return home.  Really good use of the bench to ensure you don’t burn out your top guys.

Winnipeg Free Press:  Jets storm back after rough start to beat Blackhawks 6-2.  (Paywall).  After losing the first couple of games to Chicago this season it looked like it would be a long night when the visitors scored just 11 seconds into the game.  But as Jason recaps the home side was gonna have itself quite the opening period. 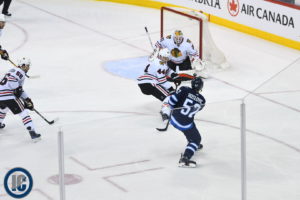 Chicago Sun-Times:  Forsberg chased again as Blackhawks face power shift in Central Division.  Read about the game from the perspective of a beat writer who covers the Hawks.

theScore:  Laine’s assist helps set longest point streak by teenager in NHL history.  It is more than the points.  His strides just seem to have more power these days and he is certainly a lot more creative with the puck.  The 16 goals and eight assists he has during the streak certainly don’t hurt.

Winnipeg Free Press:  Critics a tad rough on Buff despite a season of mostly right stuff.  (Paywall).  His game has certainly evolved.  Former NHLer turned scribe with his thoughts on the Jets big man.

Winnipeg Free Press:  Dump & Chase Episode 10 – Doggin’ it in the NHL.  (Paywall).  Jason and Mike are back for another episode of Jets and NHL talk in their online only column.

ESPN:  Why the Winnipeg Jets should be the envy of the NHL.  Lots of love for the Jets in this article including a comment or two from some host of some radio show that I may be affiliated with.