Note:  After two days of practice the Jets are back in action today with a game against the Red Wings to finish off this two-game home stand.  They will have a morning skate at 10:30 am and then puck drop at 7 pm.

Note II:  Final day of practice for the Moose ahead of a pair of games against the Wild on Saturday at 7 pm and Sunday at 2 pm.

Winnipeg Sun:  Jets vs Red Wings keys to the game.  Paul starts off with his big matchup between Connor Hellebuyck vs Jimmy Howard. His five keys to the game include: 1) Staying patient. 2) The power play. 3) Score three. 4) Pretend it’s the Preds. 5) The opening 20.

Winnipeg Sun:  Fragile or focused — still things to learn about Hellebuyck.  The Jets top netminder doesn’t like to dwell on past games and does have a tendency to want to look forward not behind.

Winnipeg Free Press:  Hellebuyck ‘focussing on next’ game after Nashville stinker.  (Paywall).  No point in lamenting the past provided you’ve learned from your mistakes. 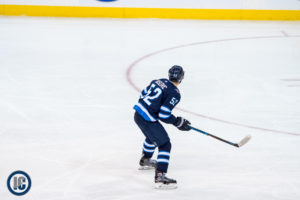 TSN 1290 Winnipeg:  Laine creating more chances for himself.  TSN Jets analyst Dave Tomlinson joined host Kevin Olszewski from Jets practice on Thursday with his thoughts on Tuesday’s loss to Nashville and what is to come Friday against Detroit.

TSN 1290 Winnipeg:  Stastny makes his linemates better.  St. Louis Blues writer Lou Korac joined host Kevin Olszewski with the latest on the St. Louis Blues and how that team is dealing with the loss of Paul Stastny to the Jets.

TSN 1290 Winnipeg:  Jets not worried about lack of playoff experience.  Jets defenceman Josh Morrissey joined the Big Show to break down what went wrong in Tuesday’s loss to Nashville, the trade of Paul Stastny to Winnipeg and why the team isn’t worried about heading into the post-season with little experience at the NHL level.

TSN 1290 Winnipeg:  Vesalainen progressing nicely for Jets.  TSN’s Craig Button joined the Big Show to take a look at the Jets including the Paul Stastny trade, what St. Louis can expect from Erik Foley and when Winnipeg can expect Kristian Vesalainen to join the NHL.

Illegal Curve:  News & Notes.  An update on the return of Nelson Nogier, Julian Melchiori being sidelined, and AHL playoff eligibility for Hutchinson/Roslovic.