Note:  The Jets pumped the visiting Panthers by a final score of 7-2 and will hold an availability today at 11 am in advance of the final game of this ten game road trip tomorrow night against the Kings.

Note II:  How will you be spending your Louis Riel day?  The Moose have an afternoon game (puck drop at 2 pm) as they welcome the Milwaukee Admirals to town in a game that will be filled with Superheros.  I am joining Steve Schuster (who is filling in for play-by-play voice Mitch Peacock who is away at the 2018 Olympics in South Korea) in the broadcast booth to provide some colour analysis of the game. 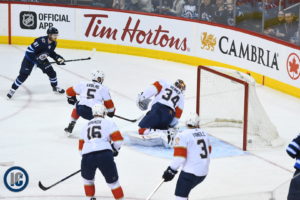 Winnipeg Free Press:  Jets tame Panthers 7-2, take top spot in Central division.  (Paywall).  This home stand has been just what the doctor ordered as the Jets have gone 6-2-1 so far.  Mike looks back at the night.

NHL .com:  Jets score seven in win against Panthers.  It was an even first period between these two former Southeast rivals but the Jets got a lead at the end of the 2nd and opened things up in the 3rd.  Scott breaks it all down.

Sportsnet:  Sens-Jets deal involving Mike Hoffman likely too complicated.  If the ask is high then moving on is probably best for the Jets with a long term view for the franchise.

NHL .com:  Jets unfazed by trade deadline.  No real point of getting worked up about something that is completely outside of your realm of control.

TSN:  Jets’ top line leads the way in impressive win.  The Jets blew the game open with four unanswered goals in the third period and it was the top line of Mark Scheifele, Blake Wheeler and Kyle Connor that led the way for WInnipeg. Dennis Beyak and Kevin Sawyer have more.

Illegal Curve:  Post-game report.  A look at some of the numbers and post-game audio from Blake Wheeler, Connor Hellebuyck, Kyle Connor and coach Maurice.