Note:  It was a controversial battle with Vegas last night that the home side pushed to overtime after a late game tying goal in the 3rd period, but one they ultimately lost 3-2 to the top team in the Western Conference.  Today, the Jets are scheduled to practice at 12 noon at Bell MTS Place.  Check out the Jets Practice Report for the latest from today’s skate.

Note II:  The Moose are back in business for their first game in six days after their AHL All-Star break.  They practiced yesterday in Rockford and will have their morning skate today at 11:15 am before tonight’s 7 pm puck drop at BMO Harris Bank Center.

Winnipeg Sun:  What’s goalie interference? Debate continues as Jets fall in OT to Golden Knights.  It was a wild game between two of the top teams in the Western Conference.

Winnipeg Sun:  Jets special teams on the rise.  While last night wasn’t a great example overall the Jets have really made big gains from where they were last season in both power play and penalty kill prowess.

Winnipeg Free Press:  Vegas beats Winnipeg with stick.  (Paywall).  The lumber snapped over Connor Hellebuyck’s mask and following the play and well after the game it was all everyone in the hockey world and the Jets themselves were talking about. 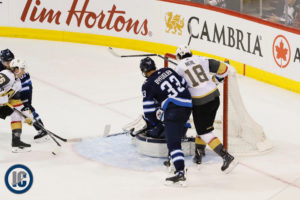 The Athletic:  Lowry and Copp relish tough minutes against opposition’s best lines. (Paywall).  Both players have continued to get better this season.  Murat takes a closer look.

Illegal Curve: Jacob Trouba is Winnipeg Jets ambassador for Hockey Is For Everyone.  While he may be off the ice for six to eight weeks the Jets defenceman will still be contributing.

CBC:  ‘You can smell the burning rubber’: Beer-league goalie suits up, faces shots at Jets practice.  Missed this one from the other day.  I was at practice on Monday when Glen came out on the ice and had us wondering who he was (with Michael Hutchinson traveling back from Utica).  I thought he did a nice job and even was impressed when he stopped a Patrik Laine shot.

TSN:  Golden Knights’ speed fueling their success.  Craig Button joins SportsCentre to take a closer look at the speed of the Golden Knights and how they’re using it to expose their opponents. He also touches on the Jets success despite some key injuries.

TSN:  Hellebuyck’s consistency breeding confidence for the Jets.  In past seasons Winnipeg’s goaltending too often seemed to be the Achilles heel, but this year that hasn’t been an issue thanks largley to the play off All-Star Connor Hellebuyck. Sara Orlesky has more on how Hellebuyck has found a consistency in his game that means everything to the Jets.

TSN:  Jets 3-in-3  (Does Trouba’s injury affect trade deadline strategy?)  Can the Jets maintain their high level of play without Jacob Trouba in the lineup? How will his absence change what Winnipeg does at the trade deadline? Sara Orlesky and Ken Wiebe discuss this and more.