Note II:  The Moose are back in action after taking Monday off.  They practice at 10 am at Bell MTS IcePlex.  Later today at 5 pm the team will be attending the backyard rink of a local family.

Winnipeg Free Press:  Five keys for Jets in season’s second half.  (Paywall).  Mike takes a look at some of the keys to keeping things rolling for the Jets when they kick things off on Saturday in Calgary.

Sportsnet:  Jets Prospect Report (Pipeline of talent shows promise).  A look at some of the up and comers from both the professional ranks and other leagues that contain Jets prospects. 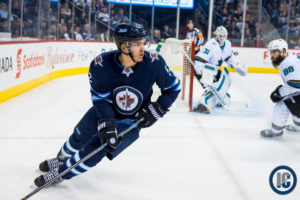 TSN 1290 Winnipeg:  Jets have addressed areas that needed improvement.  Former Winnipeg Jets 1.0 defenceman and current Winnipeg Free Press contributor Scott Campbell discusses the Winnipeg Jets performance at the player break, Wheeler’s move to centre, how much credit Paul Maurice deserves for the Jets success, and the number of young stars on the team.

TSN 1290 Winnipeg:  Jets road losses not concerning.  Scott Billeck of the Winnipeg Sun joined host Kevin Olszewski to re-cap back to back losses for the Winnipeg Jets heading into a five day break. The two discussed what the Jets can do moving forward.

TSN 1290 Winnipeg:  Hutchinson and Comrie make the whole team better.  Moose assistant coach Marty Johnston joined host Kevin Olszewski on the Donvito Roundtable to talk about the recent home-stand and the play of goaltenders Michael Hutchinson and Eric Comrie so far this season.