Note:  It is a Jets game day as they kick off their three-game road trip tonight in Buffalo.  Winnipeg has their morning skate at 10:30 am CST and puck drop is at 6 pm CST.   The Winnipeg Jets pre-game report will have you up to date when the players hit the ice. As soon as illegalcurve.com is updated we notify you via Twitter | Facebook | Instagram.

Note II:  The Moose stole a point against the Griffins last night and are scheduled to practice today at 12 noon at Bell MTS Place.  They will have a re-match with Grand Rapids tomorrow night.

Winnipeg Sun:  Five keys to Jets vs. Sabres.  Ken’s big matchup is Bryan Little vs Ryan O’Reilly.  His five keys include: 1) Picking up the slack. 2) Offence from the back end. 3) PK on the rise. 4) Making it count. and 5) Kane is able.

Winnipeg Free Press:  Holiday on horizon, but Jets all about business this week.  (Paywall).  With how tight this division is it doesn’t come as a surprise that this team is doing its best to maintain their focus.

Winnipeg Free Press:  Capt. Wheeler front and centre on top line in Scheifele’s absence.  (Paywall).  The Jets captain has done more than an admirable job filling in for the Jets top centre during his absence. 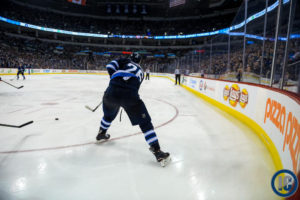 Official Jets site:  No “patting on the back” in Jets room as three-game road trip begins.  While the team is happy with their current position, especially in light of the injury to their top centre, the fact is they have a long way still to go before they reach their goal and they know that there is nobody handing them any hardware of finishing off the fist half of the season well.

Sportsnet:  Will surging Jets buy at deadline?  With how tight the central is we may not now the answer until the deadline this year.

TSN:  Wheeler thriving in the middle with Scheifele out.  The decision to move Blake Wheeler to centre ice was an easy one for Paul Maurice after Mark Scheifele got injured. Wheeler has continued to thrive despite moving to a different position. Sara Orlesky has more on his seamless transition.

TSN 1290 Winnipeg:  Competition has pushed Hellebuyck.  Tim Campbell of NHL.com joined Andrew Paterson and Rick Ralph on the Afternoon Ride. They discuss the Jets play in the first half of the season, what to expect in the second half, Connor Hellebuyck’s improved play, Dustin Byfuglien’s icetime, the competition within the roster, and the disappointing Edmonton Oilers season.

Illegal Curve:  Moose steal a point in 3-2 OT loss to the Griffins.  It wasn’t a game to remember for Manitoba as they somehow snuck away with a point in a game they likely should have lost in regulation.  Includes the lineup, notable facts, game recap, post-game audio and more.

Winnipeg Free Press:  Moose steal point after being manhandled by Grand Rapids.  (Paywall).  Jeff recaps the game as he saw it from Bell MTS Place.