Jets recall Lemieux and assign Poolman back to the Moose. 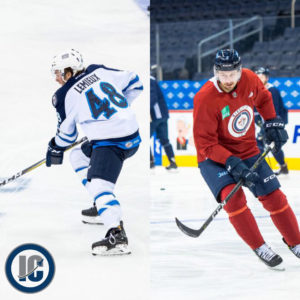 With the status of Adam Lowry still uncertain the team has recalled Brendan Lemieux as insurance for the three-game road trip.  With Tobias Enstrom now healthy the Jets had two healthy defenceman in the pressbox in Tucker Poolman and Ben Chiarot.  As a consequence they have assigned Tucker Poolman back to the Moose which is good for the young defenceman, as he will get a chance to get back into game action.

Lemieux, 21, appeared in his first seven career games for the Jets earlier this season and he scored his first NHL goal on Oct. 29/17 versus Pittsburgh. The Denver, Colorado native also has 24 points (9G, 15A) in 24 games for Manitoba this year and currently leads the club with 73 penalty minutes.

Lemieux was drafted by the Buffalo Sabres in the second round (31st overall) in the 2014 NHL Draft and was traded to the Jets on Feb. 11/15.