Note:  The Jets will look to keep things going following two wins at Bell MTS Place to start the post-Christmas break on the right foot as they end 2017 in Edmonton with a New Years Eve date with the Oilers at 6 pm cst.    The Jets pre-game report will set you up at 10 am so keep it locked to illegalcurve.com.

Note II:  The Moose are also in action today as they look to avenge yesterday afternoon’s loss to the Barracuda which was their first loss in regulation in 17 games.  Ironically, they had gone the previous 16 games (15-0-0-1) without a regulation loss which dated back to November 12th when they lost in San Jose to these same Barracuda.  Puck drop is at 2 pm at Bell MTS Place. 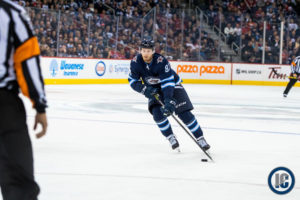 Winnipeg Sun:  Time to see how deep the Jets really are.  Plenty in this one as Paul covers a number of topics including: 1) Getting their chance. 2) J.R. on the scene. 3) Byfuglien chomping at the bit. 4) Kyle Connor, from farm to stardom.

Winnipeg Sun:  Tanev to miss 2-3 weeks, Byfuglien just days away.  The hard working forward will be out after receiving some friendly fire in the last Jets game but the team should have 33 back soon.

Winnipeg Free Press:  Injured Jets itching to return.  (Paywall).  The Jets could sure use some good news on the injury front considering the recent rash of players heading to the IR.

NBC Sports:  Injuries offer challenge while showing depth for the Winnipeg Jets.  When one door closes perhaps another will open.  Or something like that.  Scott has more on the testing of the Jets depth.