Note:  The Jets are in Michigan to kick off this three-game road trip as they play their first ever game in Little Caesars Arena. Morning skate is at 10:30 am CT and puck drop is at 6:30 pm CT.

Note II:  The Moose will practice again today at the IcePlex.

Winnipeg Sun:  Jets notebook.  Ken has a bunch of Jets notes in this piece.

Winnipeg Free Press:  Attention to detail runs in the family of Jets goalie Hellebuyck.  Judy goes back to the early years on this one about the Jets top netminder. 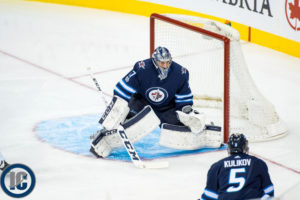 The Hockey News:  How high can the Jets fly?  The odds have certainly changed as the season has progressed.

TSN 1290 Winnipeg:  Jets sailing since Canadian Thanksgiving.  Hustler and Rick Ralph chat with NHL.com’s Tim Campbell on how all the signs are pointing in the right direction for the Jets, how they rebounded after early-season struggles, the role of Matt Hendricks, and why Edmonton is missing him.

TSN 1290 Winnipeg:  Petan producing and focused on winning games for stampeding Moose.  Nic Petan has found piles of points lately, and although he’s not putting them up in the jersey he’d most like to be in, he’s staying positive. With 2 goals and 6 assists in his last three games with the Manitoba Moose, the Delta, BC native was named the CCM/AHL Player of the Week on Monday. Petan sums up the key to his recent offensive outburst to “just keeping the game simple.”

TSN 1290 Winnipeg:  Moose scoring from every line.   Moose forward Michael Sgarbossa talks with Kevin Olszewski about the reasons the AHL team is sitting at the top of the Central Division standings, how they’re staying humble despite their success, how they’ll will manage having a week between games, his personal play and what attracted him to Winnipeg.

TSN 1290 Winnipeg:  Moose veterans key in bringing team together.  Top Jets prospect with the Moose Jack Roslovic spoke about the veterans the team has added and what impact that has had on the team.