Jets captain gets the honour. 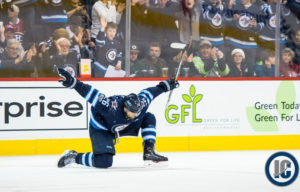 Comes with little surprise that Jets captain Blake Wheeler, after he and his team dominated this past week, was named the NHL’s First Star of the Week.

The Winnipeg Jets hockey club, in conjunction with the National Hockey League, today announced that forward Blake Wheeler has been named the NHL’s First Star of the Week for the week ending Dec. 3.

Wheeler, 31, recorded 10 points (2G, 8A) in four games last week in leading the Jets to a 3-0-1 record. The Jets captain leads the NHL in assists with 28 and sits fourth in the league in points scoring with 35. Wheeler scored and added a pair of assists in a 7-4 win vs. Minnesota on Nov. 27 before being held off the scoresheet in the club’s 3-2 overtime loss on Nov. 29 at Colorado. The Plymouth, MN native then recorded a trio of assists in Winnipeg’s 7-4 over Vegas on Dec. 1 before capping the week with a goal and another three assists in the 5-0 victory vs. Ottawa on Dec. 3.