Note:  The Jets returned to Winnipeg on Sunday after concluding a four-game road trip.  The team is home for one game tonight at 7 pm against the Wild.  The big question will be what is the status of Steve Mason who left the game on Saturday night after the 1st period.  While we still don’t know the status of Mason (aside from him being placed on IR) we do know that Eric Comrie has been recalled from the Moose.  Stay tuned for the Winnipeg Jets pre-game report.

Note II:  The Moose didn’t practice on Sunday but will resume practicing today at 12 noon in Milwaukee before they head to Rockford, Illinois to take on the IceHogs on Tuesday night as they wrap up their three-game road trip.  Manitoba is one of the hottest teams in the AHL and have won 10 of their last 11 games and sit with the 4th best winning percentage in the league. 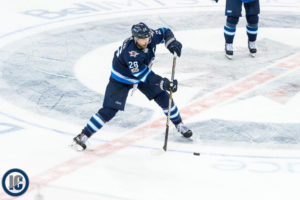 Winnipeg Sun:  Jets nearing end of busy month.  It isn’t gonna get any slower or easier as this team is gonna have a period where they are playing every second day.

Winnipeg Free Press:  Plenty of options for backup role.  (Paywall).  As I illustrated the other day both Michael Hutchinson and Eric Comrie have been playing well.

Winnipeg Free Press:  Chiarot believes fine the right punishment for butt-end.  I suspect folks around these parts feel it was the best use of $3,763.44 (US).