Note:  The Jets were back in business yesterday and the Winnipeg Jets Practice Report provides you with the latest tidbits about the local team.  Get caught up in advance of today’s 10:30 am pre-game skate.  The Jets pre-game report will give you insight ahead of tonight’s re-match with the Coyotes.  It is also the Dale Hawerchuk Hall of Fame ceremony so be sure to get to the rink with plenty of time to spare to witness the pre-game ceremony.

Note II:  The Moose are back in town following a successful California six-game road trip.  They will practice at Bell MTS IcePlex at 12 noon as they prepare to face Chicago in a pair of games starting with a 7 pm contest on Wednesday night in downtown Winnipeg.  The teams forward ranks has been bolstered by the return of Brendan Lemieux who was assigned by the Jets yesterday.

Winnipeg Sun:  Five keys for game vs Coyotes.   Ken starts with his big matchup which for tonight’s contest is between Josh Morrissey and Clayton Keller. His five keys are: 1) Find your legs. 2) Stronger out of the gate. 3) Redemption game. 4) Laine stays hot. 5) Little finding his offensive game. 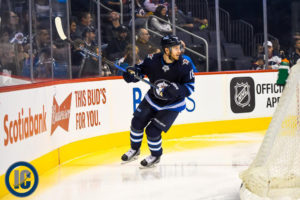 Winnipeg Sun:  Perreault wonders where he will fit in.  From a team that is looking for more balance to its lines and added scoring the return of 85 will likely provide both of those desired results.  Paul also wrote about Myers, Lemieux, Jets play of late and goalies.

Winnipeg Sun:  Hawerchuk to join the Hot Line in Jets Hall of Fame.  It really was enjoyable to have grown up during these days and to be able to watch the man known as Ducky ply his craft on the ice at the old Winnipeg Arena.

Winnipeg Sun:  Teemu likely next into Jets Hall.  If that is the case it will ensure that all three eras of Jets 1.0 hockey have been represented.  And you’d be hard pressed around these parts to find someone who fans would want to see more up in the rafters than the Finnish Flash.

Winnipeg Free Press:  Jets can’t take it easy on Arizona.  (Paywall).  Brings to mind the cliche that is often uttered by NHL players and coaches alike “we cannot afford to take team X lightly because on any given night team X can beat team Y”.  Until you’re the type of team that can assert your game on an opponent for a full 60 consistently, the fact is that you probably cannot afford to take any other team lightly.

Winnipeg Free Press:  Young Jet loses an inspirational friend.  (Paywall).  I can attest to the fact that when you are young it is hard to comprehend losing a friend your age, so I can empathize with Brandon Tanev’s loss.

TSN:  The 7-Eleven Power Rankings – Jets continue to soar.  From seventh spot up to third for the local NHL franchise.

TSN 1290 Winnipeg: Winnipeg Jets play-by-play voice Dennis Beyak joins Rick Ralph and Jim Toth on the Afternoon Ride. They recap the Winnipeg Jets road trip to Vegas and Arizona, and look ahead to the upcoming homestand.