Note:  The Jets finished off their two game home stand with a 5-4 OT loss to the Habs on Saturday night which means they took three of four points over the two games.  The team was originally scheduled to skate before leaving for Dallas but will not simply speak to the media at noon before departing for Texas where they will begin a three game road trip.  The Winnipeg Jets Practice Report will bring you up-to-date.

Note II:  The AHL affiliate Manitoba Moose also went to OT last night as they played their third of six California games.  They won 2-1 when Cam Schilling put it home in extra time with Nic Petan and Jack Roslovic picking up the assists on the game winner.  The team now returns to Stockton for a re-match with the Heat which takes place on Wednesday.  They then close out their final two California road games in San Jose next weekend.

Winnipeg Sun:  Speedy Habs come back to win in OT.  While the Habs likely deserved to win the contest last night the non-call when Dustin Byfuglien was interfered with in overtime played a fairly significant part in the loss.  Ken breaks it all down. 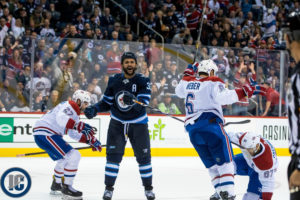 Winnipeg Sun:  Julien sees growth in Wheeler.  In addition to writing about what his former Bruins coach sees in his former forward, Ken wrote about spreading the minutes among the defence, Laine working the media and Lowry.

Winnipeg Free Press:  Canadiens ground Jets in OT.  (Paywall).  Had I not been there I’m not sure I’d believe the Jets would have given up 50 shots in a game and still came away with a point.  Even more incredulous was the fact that it looked like they’d end up with two points holding a 4-2 lead.

Winnipeg Free Press:  Lowry misses ninth straight.  (Paywall).  Looks like the Jets centre will be back sooner rather than later and then the question becomes what happens with the line shuffling.

Sportsnet:  Canadiens prevail in instant classic over Jets.  Not sure there was anything classic about last night’s game from the Winnipeg perspective but here is another recap.

Montreal Gazette:  About last night … Canadiens edge Jets 5-4 in OT.  Read about the game from someone who covers the Habs.

Topics: Jets week in review, Are the Jets relying too much on the stellar goaltending of Connor Hellebuyck, Previewing the Jets/Canadiens,  How the Jets lines could change with Adam Lowry and Mathieu Perreault back in the lineup