Note:  Tune in at 9 am for three hours of Winnipeg Jets and NHL hockey talk on the Illegal Curve Hockey Show on TSN 1290 Winnipeg.

Note II:  The Jets hit the ice at 9:30 am for morning skate as they get ready to finish off this two game home stand with a date with the Habs.  Puck drop is at 6 pm.

Note III:  The Moose picked up a 4-1 win over the Heat last night.  Jets prospect made big contributions in the win: Eric Comrie was great in net (40 saves), Jack Roslovic 1G 1A, Mason Appleton 1G 1A, Nic Petan 2A and Sami Niku had his first goal.  Third game of six game road trip is tonight back in Bakersfield.

Winnipeg Sun:  Lemieux carving out role as an agitator.  Can’t help but think about the talk from the coaching staff of taking a guy out of his role in the AHL and having him fulfill a similar role in the NHL.  Lemieux is a product of this as he brings that same level of pugilism to Jets games that he did at Moose games. 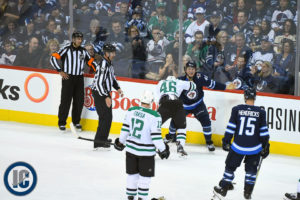 Winnipeg Free Press:  Hellebuyck looking like an all-star after off-season work.  (Paywall).  No doubt that his play has been inspiring to start this season.

Yahoo Sports:  So are the Jets actually good now?  While their record would seem to answer that question Ryan looks at some of the underlying numbers to see if that bears itself out.

The Athletic Winnipeg:  What is the Winnipeg Jets’ most optimal forward lineup? (Paywall). With the imminent return of Adam Lowry and then Mathieu Perreault some decisions are going to have to be made. Murat offers up what he sees as the best lines for the Jets to continue their success.

Illegal Curve:  An answer to the question ‘What happens to the Winnipeg Jets hat trick hats’.  Back in January 2015 when the Jets only had two hat tricks I wondered what the plan was for all these hats that got tossed onto the ice.  Almost three years and seven hat tricks later (in Winnipeg) we have our answer.

TSN:  Laine might be concerned about his play but Jets aren’t.  OverDrive hosts Bryan Hayes & Jeff O’Neill are joined in studio by TSN Hockey Insider Bob McKenzie to get his take on Patrik Laine calling himself out for not performing well despite the Jets winning record.

TSN 1290 Winnipeg:  Jets had best defensive game of the season vs. Dallas.  Ken Wiebe of the Winnipeg Sun joined Andrew Paterson and Rick Ralph on the Afternoon Ride. They discuss the Winnipeg Jets win vs. Dallas, the player that will come out of the lineup when Adam Lowry returns, Patrik Laine’s sophomore slump, and the goalie rotation for the upcoming games.

TSN 1290 Winnipeg:  Jets are on an impressive run.  TSN’s hockey analyst Ray Ferraro joined the Afternoon Ride and discusses the Winnipeg Jets success this season, the Candiens struggles and how the Vancouver Canucks have changed their style of play.

TSN 1290 Winnipeg:  Hellebuyck is carrying the Jets.  Matt Larkin of The Hockey News joins Kevin Olszewski on the Donvito Roundtable. They discuss the Hockey News’ prediction that the Jets will be 2018 Stanley Cup Champions, if their current run of success is sustainable and Connor Hellebuyck’s improved play this season.

TSN 1290 Winnipeg:  Poolman is excited about opportunity with Moose.  Moose play-by-play voice Mitch Peacock joined the Afternoon Ride and discusses the Moose’s road trip to California, Tucker Poolman’s arrival and how Michael Hutchinson has handled his demotion to the AHL.

An answer to the question ‘What happens to the Winnipeg Jets hat trick hats’
Game 13: Jets vs. Canadiens pre-game report