Finally have an answer as to where the hats end up.

Almost three years ago in January of 2015 I asked the question What happens to the hat trick hats?  This was right after Mathieu Perreault’s four goal performance gave the Jets two hat tricks (Bryan Little got the first one for the Jets vs Colorado in December) in 39 days.  The three preceding seasons the team hadn’t accomplished the feat.

In January of 2016 when Nikolaj Ehlers got his first NHL hat trick talk began to swirl about a display of some sort for the hats that got tossed onto the ice inside (at the time) MTS Centre.  At that time I was told by the Jets that while nothing was official eventually there would be some sort of display. 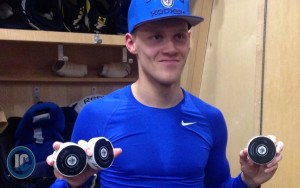 As you can see illustrated below, since that Ehlers hat trick back in January of 2016 there have been a further seven hat tricks and clearly the need for a display had increased since the lean first few years of the Jets 2.0

Interestingly of the 12 hat tricks that have been accomplished since Bryan Little got the party started for the Jets 2.0, ten of these have come inside the friendly confines of MTS Centre/Bell MTS Place.  Only Nikolaj Ehlers in Edmonton against the Oilers and Patrik Laine’s inNew York against the Rangers were accomplished outside of Winnipeg.  Three of the 10 hat tricks have come against Dallas (Laine had two in 2016-17).  Six against the Western Conference and six vs Eastern Conference. 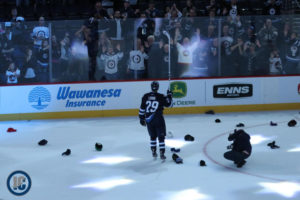 When the Jets were making their upgrades to Bell MTS Place, one modification on the 2nd level where the escalators terminate, saw them create a display for all these hats. 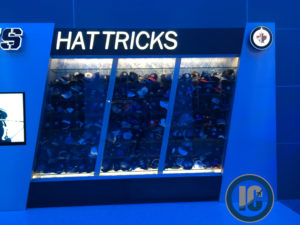 So there you go, the answer to that “burning” question of what happens to the hats that folks toss onto the ice.  What do you think?  Do you like the display?

**This story was updated to include Laine & Tanev’s hat tricks which were accomplished after this piece was written.