Note:  The big news of the day on Wednesday was that the Jets activated Matt Hendricks off of IR and assigned Nic Petan to the Moose.  The team held a practice at the IcePlex before departing for Pittsburgh and for all the news check out the Winnipeg Jets Practice Report.

Note II:  Once the Jets hit the ice for their morning skate we will have your projected Jets lines along with pre-game audio.  Puck drops at 6 pm CT in Pittsburgh.  Keep it locked to illegalcurve.com and on social media including Twitter| Facebook | Instagram for all the latest pre and post game news.

Note III:  The Moose won their second straight game yesterday in Chicago as Eric Comrie made 36 saves in the victory.  The team is now 4-3 on the season and will practice today at Bell MTS Place as they prepare for a pair of games Friday and Saturday night against Belleville.

Winnipeg Sun:  Lemieux looking forward to playing with ‘father-figure’ Hendricks.  Coach Maurice has been touting the virtues of the leadership of Hendricks and Brendan Lemieux spoke about what he hopes to learn.   Ted covers some more topics including: 1) Power-play time. 2) Lowry ruled out. 3) Reaves making an impact. 4) No hard feelings between Wheeler and Malkin.

Winnipeg Sun:  Petan needs to do more to earn spot with Jets.  While the move to assign Petan caught me by surprise (since he hadn’t been an extra skate in Tuesday’s practice unlike Dano) what wasn’t shocking was the reaction of the two factions on twitter who either feel that Petan hasn’t done enough to merit time up with the big club and those that see this as mismanagement of an asset.

Winnipeg Free Press:  Rested, recovered Jets ready for Sid & Co.  (Paywall).  After five days of skating and talking, the team will finally get that opportunity to play again.  Huge couple of games against some very difficult and talented teams.

TSN:  Poolman provides option for Jets.  In his latest post Paul writes about what the East Grand Forks native brings to the organization. 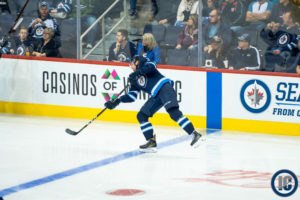 Sportsnet:  How five teams are living up to expectations.  The local team has made this list.

TSN 1290 Winnipeg:  Lowry a solid performer on Jets third line.  Murat Ates of the Athletic joined the Afternoon Ride to discuss the Winnipeg Jets depth forwards, their performance in different scenarios, and how they compare across the league.