Note:  While the Jets will have the day off today you can still expect some big news as the team is expected to cut the roster down fairly significantly today.  Expectations are most (if not all) of group 1 will be re-assigned back to their junior teams or the Manitoba Moose with the Jets AHL camp starting up on Monday.   As always keep it locked to illegalcurve.com for any breaking Jets news and be sure to follow us on social media including Twitter | Facebook |Instagram.

Winnipeg Sun:  Jets fall to Oilers, axe coming to roster.  Ken breaks down the game from Edmonton as the team loses another pre-season contest.

Winnipeg Sun:  Wheeler uses Twitter to express frustration with Trump.  Regardless of your belief system he is entitled to share his thoughts on this subject and I am glad he didn’t “stick to sports”.  With respect to the stick to sports comments, the irony is the captain didn’t really share an opinion on the subject, simply that people are entitled to have an opinion despite your agreeing or disagreeing with their position.

Winnipeg Sun:  Comrie pushing for more.  He is a world-class goalie but I don’t think another season in the AHL will harm his development, especially with a more veteran defence with the Moose this upcoming season. 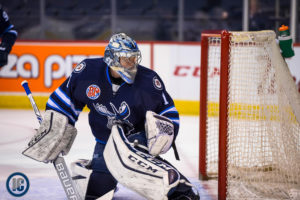 Winnipeg Free Press:  Oilers grease winless Jets.  (Paywall).  Another young Jets squad with the same result (a loss) as they had in game three.  The team is now 0-4 in pre-season as they dropped the game in Alberta last night.  Mike breaks it all down.

Winnipeg Free Press:  Wheeler sounds off with pro athletes on Trump’s controversial comments.  (Paywall).  I was glad to see the captain standing up for free speech.