Winnipeg Sun:  Big Buff’s boating charges resurface.  We should know more tomorrow after the settlement conference.  He will be in Florida with the team while his lawyer takes cares of business in Minnesota.

Winnipeg Free Press:  Cheveldayoff to speak at U of M fundraiser.  Jets GM to speak at the fundraiser for the men’s and women’s hockey team at U of M.

Winnipeg Free Press:  Reborn Jets a success off the ice.  I can hardly say I’m surprised by these reports that the Jets have been a financial success.  Merchandise flies off the shelves the moment you slap a Jets symbol on it and the MTS Centre is at capacity every night.

Winnipeg Free Press:  Finally find the twine.  I don’t want to say I told you so, but literally 30 seconds before Thorburn scored his 1st as a Jet, I predicted on twitter that he would score.  Of course as the rest of the IC team was quick to point out, I’ve been saying that pretty much every game for the last 15 or so.  He did score 3 of his 8 goals last season in consecutive games so perhaps last night was the start of a new streak.

Winnipeg Sun:  Pavelec rested and ready.  It is crunch time and perhaps we will be looking back at that 3rd save in the shootout against that guy who was also born in Kladno, Czechoslovakia (Jaromir Jagr) as one of the biggest saves of the year.  He was solid all night long for the Jets. 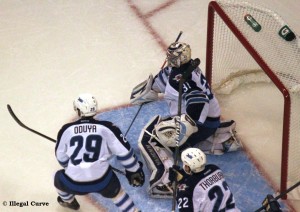 Winnipeg Sun:  Thorburn finally snaps drought with first goal.  Even nicer for him was the fact that it was a hard snap shot and not a garbage goal, although at that point in the drought any goal would likely have sufficed.

Winnipeg Sun:  Snapshots.  Maybe there is hope after all.  Where is the beef?  No shots thru 10.  Jets poor opening 20.  Lack of coincidental on Thorburn minor.  Stuart’s smart decision.  Sean Courturier vs. Mark Scheiefle.  Antropov makes pass of the night.  Wheeler shows off his wheels.  Pavelec in shootout.  Groundhog dag on Thursday – Jets get repeat performance?

Winnipeg Sun:  The Kane mutiny.  There is a reason they are called the vocal minority.  Even though the Jets young star says 95% of his twitter fans have been positive, it is that 5% who generally speak (or in this case tweet) loudest/most aggressively.  Some social media downtime and a more intense focus on hockey is probably just what the sniper needs.  We had complied a list of Jets players you can follow on twitter.

Illegal Curve:  Jets on a Deadline – Jets 2 Flyers 1 in shootout.  Game recaps, video highlights and the NHL.com 3 Stars of the night.

The Telegram:  When Ramsay first hit the ice, he really did.  Another player who developed his love of the game as a result of the Gretzky influenced rinks of Southern California.

TBO.com:  Bolts top Capitals in OT for fifth straight.  The Jets streak of stopping streaks will need to continue as they take on the Lightning on Thursday.  The Bolts are trying to make the Southeast Division even more muddled as they narrowed the gap between themselves and 1st place Washington to 8 points on Tuesday.