Jets news: Mission playoffs – plenty to address as Jets get back to work. How about an All-Star game at MTS Centre? Trade deadline wild card. Hard climb ahead for Jets. Five questions the Jets need to answer. Jets wives, girlfriends to attend charity fashion show.

Next opponent news – Philadelphia Flyers: Hartnell a fall guy with a cause. Giroux attracts star buzz.

Note: Jets have recalled forwards Aaron Gagnon and Spencer Machacek.  Doesn’t bode well for injury news. Will keep you posted whenever we hear anything new.

Winnipeg Free Press:  Citizen Kane – Sakic and the Avs were my inspiration.  Not shocking that Burnaby Joe was his inspiration.

Winnipeg Free Press:  Mission playoffs – plenty to address as Jets get back to work. Ed Tait takes a hard look at the Jets reality as the team gets back to business.

Winnipeg Free Press:  How about an All-Star game at MTS Centre?  Let’s hope we aren’t forced to wait like Ottawa was for almost two decades before being awarded an All-Star game.  Gary Lawless also goes into detail about the situation in Phoenix.

Winnipeg Sun:  Trade deadline wild card.  This is always an opportunity for a smart GM to turn some current assets into future prospects with a team looking for success today and willing to mortgage its future.

Winnipeg Sun:  Hard climb ahead for Jets.  As they said in Dumb and Dumber “so you’re saying there’s a chance”.  Until you have been mathematically eliminated anything is possible.  While the Jets chances don’t look great, if they suddenly become road warriors and win the majority of the next 7 games away from the friendly confines of the MTS Centre, it puts them into a much better position.

Winnipeg Free Press:  Jets wives, girlfriends to attend charity fashion show.  It isn’t just the Jets that are using their status to try and help the community.  Nice way to help raise money for a good cause.

The Telegram:  IceCaps, True North look to extend relationship.  The AHL/NHL relationship is an interesting one.

The Telegram:  Redmond adjusting to pros after college career.  At 23 he is not a spring chicken, but has continued to develop his game under head coach Keith McCambridge and is currently at the AHL All-Star game.

The Telegram:  Postma’s one main goal: become a reliable two-way D-man.  This is the lower portion of the Redmond article above (scroll about 1/2 way down the page) which discusses the Jets offensive prospect learning a defensive game.

Philadelphia Inquirer:  Giroux attracts star buzz.  Stardom can be fleeting so while some may look at it as a burden it is better that people are talking about you than not. 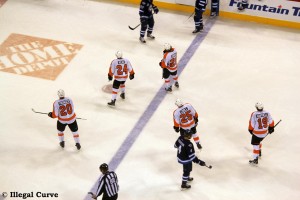 Philadelphia Inquirer:  Hartnell a fall guy with a cause.  Pretty innovative way to donate money to charity.