Globe and Mail:  Winnipeg waiting to host NHL All-Star weekend.  Winnipeg knows how to throw a party and loves to show the rest of the world that we do things right here in Manitoba.  Whether it is an All-Star game or a Heritage Classic it will be quite the adventure.  Any bets as to when/if Winnipeg will be hosting either?

Winnipeg Free Press:  Other Jets were asked to play in All-Star tilt.  It is too bad we won’t be seeing a Jets jersey on the ice.  Again, it is probably a good thing the Jets are getting some R & R time as when they return they will need to achieve 46 out of a possible 64 points in the 32 games remaining to hit Coach Noel’s target of 96 points for a playoff spot.

Jets Official Site: Your one-stop hockey shop.  Always nice for fans to get a chance to watch their Jets practice occasionally at the IcePlex.

Gloucester County Times:  Flyers don’t have a goalie controversy yet.  Consistency appears to be the biggest issue that Bryz is facing and when you’re paying him 51 million, that isn’t an issue you want to be dealing with.

Philadelphia Inquirer:  Different paths led Flyers’ Read and Couturier to same destination.  Interesting to read the stories on how the Flyers rookies have arrived at their present level of success. 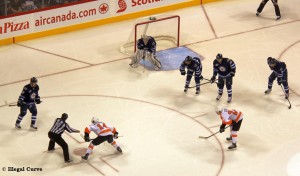 Philadelphia Inquirer:  Sports writers association to honour Giroux.  The pride of Hearst, Ontario continues to get recognized for his achievements.