Illegal Curve:  Jets GM Kevin Cheveldayoff asked about Ehlers & Little extensions.  I don’t think he is the only one who would like to see these two wearing Jets uniforms for the foreseeable future.

Sportsnet:  Beyond a rebuild, Jets have more pressing concerns than draft lottery.  While the team could add a piece the laser focus of the fan base will be the moves made by the GM around the draft and during free agency.

Sportsnet:  Linden, Cheveldayoff look back on their draft days.  (Video).  Canucks president of Hockey Operations Trevor Linden and Jets General Manager Kevin Cheveldayoff talked about how the NHL is changing to a much more skilled and fast game.

Illegal Curve:  Jets get the 13th pick in 2017 NHL Draft Lottery.  They fell one spot last night courtesy of the draft lottery.  Of course last time they selected 13th was 2013 when they got Joshua Morrissey.

Yahoo Sports: Mark Scheifele on ball hockey, Winnipeg’s season, working with Adam Oates.  The Jets top centre has really been making the rounds over the past week. 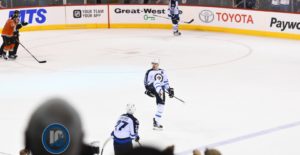