Next opponent news – New Jersey Devils: Devils return home to face Winnipeg. Devils get a shot at being homebodies.

TSN:  Mason to face Devils.  Coach Noel is riding his hot hand and giving his #1 tender some well deserved time off.

Winnipeg Sun:  Jets aim for first back-to-back win of season.  A win on the second game of a back-to-back has been as elusive as Bigfoot for the Jets.  Perhaps they will do better in their 2nd try of 2012.

Winnipeg Free Press:  Mason first to throw no-no at Sens this season.  If he keeps playing this well in the old pads, we might not see the new pads until 2013.

Winnipeg Sun:  Snapshots.  No passengers on this train.  Great start for GST.  Setting the tone early.  Kane getting call from Shanny?  Passing fancy.  Nik had his best game.

Winnipeg Sun:  Talent too thin.  There is no confusing this Jets team with one of the elite powers in the East but when healthy, in large part due to their exceptional goaltending, they can compete.

Winnipeg Sun:  Wheeler nears return.  As the above article suggests, the Jets are quite thin in the offensive department.  In January they haven’t scored more than 3 goals in a game.  So getting Wheeler and his legs back will be a boon to this team.

Ottawa Citizen:  Jets trying to wipe away Thrasher memories.   Just because the team is wearing new jerseys and is playing in front of a rabid fan base doesn’t mean they will start scoring goals in droves and winning games.  Many on this team are aware of the slump they had mid season which cost them the playoffs.  Despite the injuries, they will need to continue winning on the road in January if they don’t want to dig themselves too deep a hole.

Winnipeg Free Press:  Chipman speaks at News Café.  Chairman of True North and Governor of the Winnipeg Jets answers questions in this Q & A session.

The IC Touque makes it to the HP Pavilion courtesy of our friend from San Jose, Bryan Lynch.  If you too would like to rock an IC Touque, check it out on our Merchandise page.  We want to see your photos of you wearing an IC Touque. 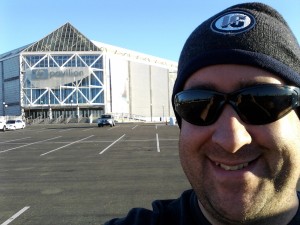 The Telegram:  Jaffray always adds something to team he’s on.   Cannot say I’m surprised to read those numbers on Jaffray.  Little Q & A at the end of the article.

Star-Ledger:  Devils return home to face Winnipeg.  Basically a home and home for the Devils who have been off since they played on Saturday afternoon in Winnipeg.  Still no word if rookie Adam Henrique will be healthy enough to play against the Jets.

North Jersey:  Devils get a shot at being homebodies.  The Devils sit in 6th spot, 4 points back of the Senators but with 3 games in hand.  Of course they have the Capitals, Penguins, Leafs and Jets all in close proximity, so a decent homestand before the All-Star break is a necessity to maintain playoff positioning.