Note: Following the All-Star break the Jets will hit the ice at 2 pm for a practice at the IcePlex before they take off for St. Louis.  They play the Blues tomorrow night.

Note II:  The Moose are on an All-Star break until they return to practice on Thursday here in Winnipeg.  Except for rookie centre Jack Roslovic who will take part in tonight’s AHL All-Star game in Allentown, PA as the Manitoba representative.  He finished with the fourth fastest time in AHL Skills Competition history (second overall last night) and made an unbelievable move in the shootout challenge.

National Post:  Patrik Laine riding a wave of momentum, appears destined for greatness.  Michael has some good insight from spending some time with the Jets sniper during the All-Star weekend. 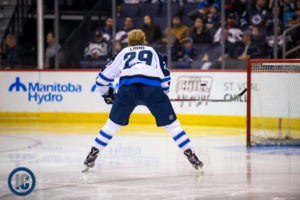 NHL.com:   Laine a hit at first All-Star Game.  Sounds like he had just the sort of experience that the Jets brass was hoping the super rookie would have in L.A. this past weekend.

NHL.com:  Patrik Laine post-game comments.  (Video).  Patrik Laine reflects on the weekend, comments on the ASG format and looks forward to the unofficial second half with the Jets.