Note:  Jets rookie sensation Patrik Laine who had a good showing last night in the Skills Competition, will play this afternoon at 2:30 pm CT.

Note II:  The Moose ended their six game road trip last night with a win over the Checkers to go an even three wins and three losses while away from Manitoba.  Eric Comrie started all six road games.  Chase De Leo left the game and did not return yesterday.  The team will have a few days off as the AHL All-Star games gets underway in Allentown, PA on Sunday.  Centre and top scorer Jack Roslovic will make his way to the game as Manitoba’s representative.

Sportsnet:  Matthews, Laine, McDavid earning respect amongst established elites.  Lots of praise for these young bucks and Winnipeg is fortunate to have one of these top young players in the fold. 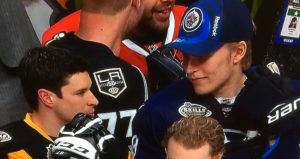 NHL.com:  Laine earns Central two points at Skills Competition.  While his accuracy shooting was better in Winnipeg his hardest shot went up a notch in La La land.

Illegal Curve:  How does Winnipeg Jets 1.0 great Dale Hawerchuk get left out of #NHL100?  On Friday the NHL revealed their list and seemed to anger everyone in the 204.

Topics:  Jets-Blackhawks Recap, Jets path to the playoffs (if there is one),  Bryan Little’s hot streak,  The 2017 NHL All-Star Weekend in Los Angeles,  The Top 100 Greatest NHL players is unveiled and Dale Hawerchuk doesn’t make the list

Topics:  Countdown to Trade Centre, Are the Pittsburgh Penguins going to move Marc-Andre Fleury before March 1, Taking calls on the Boston Pizza Fan Line in Hour #3