Note:  The Jets will be hitting the ice for a game against central division rival St. Louis this afternoon in Winnipeg with a 2 pm puck drop at MTS Centre.  As always keep it locked to illegalcurve.com for pre and post game news and be sure to follow us on social media including Twitter | Facebook | Instagram.

Note II:  Moose will be back in action tonight in San Antonio as they get a re-match with the Rampage with puck drop at 7 pm.  The Moose got their first shutout of the year last night as Eric Comrie got his first win in quite some time and Jack Roslovic and Chase De Leo both scored their ninth goals of the season to give Manitoba the 2-0 win.

CTV News:  New technology enables legally-blind boy to see Jets game for first time.  Just amazing what technology can do and I hope that young fan enjoyed the opportunity to finally get to see his team play a game.

Winnipeg Sun:  Fourth line for Ehlers sent message.  Cannot help but continue to be impressed by Ehlers as he accepted the critique and then proceeded to handle the questions during his scrum as opposed to being petulant about the coach’s comments. 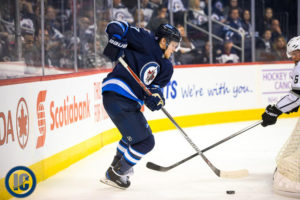 Winnipeg Sun:  Laine can’t remember hit that concussed him.  That certainly didn’t sound good to hear the rookie admit that he really couldn’t recall much after the hit.  Fans will have to hope that their prized rookie will continue with his progression symptom free.

Winnipeg Free Press:  Laine, wearing no-contact jersey, returns to Jets practice.  (Paywall).  I used my Monty Python line from a Quest for the Holy Grail “And there was much rejoicing” when he hit the ice for a skate but me thinks fans were a wee bit more excited to see the rookie actually skating with his teammates.

TSN:  How should the Jets handle Laine’s return?  (Video).  With Patrik Laine returning to practice Friday after suffering a concussion two weeks ago, Dave Poulin and Jeff O’Neill join Gino Reda to discuss how the Jets should handle their returning star.

TSN:  Despite Laine’s positive progress, Jets must adhere to “stringent” guidelines.  (Video).  After Patrik Laine returned to practice Friday wearing a non-contact jersey, TSN Hockey Insider Darren Dreger explains why the procedure is “stringent” in regards to getting him back to action as the Jets’ star rookie continues to recover from a concussion.

Official Jets site:  Bond of Brothers.  Good read from Ryan on the relationship that has developed between the two uber talented teammates.

Sportsnet:  Winnipeg Jets mid-season report cards.  As one might expect it isn’t too rosy a picture here in Peg’ city with this assessment.

The Hockey News:  Promising Jets going nowhere until they shore up their goaltending.  I don’t agree with the idea that the Jets haven’t drafted well when it comes to goalies.  Hellebuyck,  Comrie and Phillips are all nice options between the pipes and all were drafted by Winnipeg.  You could argue that Hellebuyck was rushed but he is still long term likely to be a solid goalie for the Jets.  In fact, InGoal Magazine which evaluates goalies, had Hellebuyck and Comrie in their top five of goalie prospects.

Sportsnet:  Time to hit the panic button?  Some Jets content in the Tape to Tape podcast including a visit from Sean Reynolds.

TSN 1290 Winnipeg:  Pavelec call-up tells you how much Jets needed saves.  Pierre LeBrun joins Hustler & Lawless to discuss the Winnipeg Jets calling up goaltender Ondrej Pavelec, Blues netminder Jake Allen being left off a road trip, and why teams are scrambling to comply with the upcoming expansion draft.

TSN 1290 Winnipeg:  Hellebuyck’s growing pains expected given experience.  MSG goaltending analyst Steve Valiquette joins Hustler & Lawless to discuss the challenges Connor Hellebuyck is having in the Winnipeg Jets net. Valiquette also discusses the troubles Henrik Lundqvist & Jake Allen are having between the pipes and between the ears.

Global News:  Moose go big in Texas.  The farm club got their 16th win of the season last night which is something they didn’t achieve until February 20th last season.  Russ breaks down the victory.