Note:  Not sure there has ever been this much anticipation to watch a game between the second and third last teams in the Western Conference but that is exactly where we find ourselves on this fine Wednesday.  The Alexander Burmistrov led Coyotes are in the city to take on the Pavelec led Jets in a 6:30 pm contest.  As always be sure to keep it locked to illegalcurve.com for pre and post game news and on social media including via Twitter | Facebook | Instagram.  Update:  No changes to the Jets lines or D pairs meaning only change is between the pipes.  Get more in the Winnipeg Jets pre-game report.

Note II:  Not to be overlooked but the Manitoba Moose will also be playing tonight as they are in Texas to take on the Stars as they look to start a winning streak following a win over the Wolves on Sunday at the MTS Centre.  They will have a new backup goalie in the fold as they signed ECHL goalie Garrett Bartus to a PTO yesterday after Ondrej Pavelec was recalled by the Jets.

TSN:  Goaltending is the real issue in Winnipeg.  Gary chimes in on the topic du jour here in Peg’ city.

Winnipeg Sun:  Pavelec hoping to stay as long as he can.  He sounded fairly pragmatic in the close to 13 minutes he spent chatting with reporters yesterday.  Twitter seems to still be melting down between the pro and anti Pavelec factions.  As I said yesterday it is going to make for interesting times in the city.

Winnipeg Sun:  Desperate times for Jets.  It was a move that many didn’t see happening once the Jets sent Pavelec down to the AHL to start the year but as Ted writes these are desperate times for the organization.

Winnipeg Free Press:  Pleased but pragmatic Pavelec pumped to play.  (Paywall).  Something tells me that regardless of what the end results are it is going to be quite interesting around Winnipeg this week. 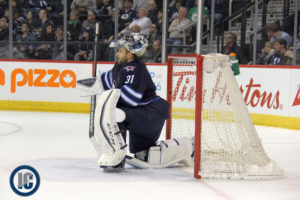 Winnipeg Free Press:  Burmistrov eager to show Coyotes what he’s made of.  (Paywall).  During his media availability he was given an opportunity to affirm a joke about Winnipeg being cold and choose instead to talk about warmth of the people.  Regardless of how you felt about his game on the ice, he was good to fans off the ice.

CBC:  Ondrej Pavelec’s return gets slumping Jets’ attention.  This is like throwing freezing cold water at someone to give a good shock to their system.  At least I suspect that is the intent.

TSN:  Jets had no choice but to call up Pavelec.  (Video).  TSN Senior Correspondent Gary Lawless joins Sara Orlesky to talk about why Michael Hutchinson and Connor Hellebuyck play forced the Jets to call up Ondrej Pavelec and discusses how the three goaltender system will work for Winnipeg moving forward.

Illegal Curve:  Winnipeg Jets Injury updates.  When is an update not an update? Nothing too much new with Laine and Myers but folks have been asking. This is what coach Maurice had to say about these two players.

Illegal Curve:  Winnipeg Jets Practice Report.  Head inside the MTS Centre to hear from Ondrej Pavelec, Connor Hellebuyck, Michael Hutchinson and coach Maurice.  Well worth the time if you ask me.

TSN 1290 Winnipeg:  Jets biggest problem is coaching.  TSN Director of Scouting Craig Button joins Hustler & Lawless to explain why he thinks the lack of performance of the Winnipeg Jets lay at the feet of head coach Paul Maurice.

TSN 1290 Winnipeg:  Undercurrent of change was there for Jets.  Winnipeg Jets play-by-play announcer Paul Edmonds joins Hustler & Lawless to discuss the change in net for the Winnipeg Jets, how the Jets have regressed to lacking resiliency, and why all the blame can’t lay at the feet of the goalies.

TSN 1290 Winnipeg:  Calling up Pavelec almost like making a trade.  TSN Hockey analyst Dave Poulin joins Hustler & Lawless to discuss the state of the Winnipeg Jets, the team calling up netminder Ondrej Pavelec from the AHL, and where the onus lies in their sub-.500 record.

TSN 1290 Winnipeg:  Pavelec should be motivated more than ever.  Analyst Shane Hnidy discusses the Jets road trip and Ondrej Pavelec’s call up.

TSN 1290 Winnipeg:  Jets goaltending plan shaky from start.  Former NHL goalie Trevor Kidd joined the Big Show in the wake of Ondrej Pavelec being recalled by the Jets to touch on the goaltending situation in Winnipeg and why the risk of using two young goalies didn’t pay off for management.

Illegal Curve:  Garrett Bartus signed to a professional tryout agreement.  I incorrectly believed that Jets prospect Jamie Phillips might be brought from the ECHL but instead the Moose made a signing to get Eric Comrie  backup.