Note:  The Jets are back in Winnipeg after the longest road trip of the 2016-17 season following a 5-1 loss in Nashville last night.  The team will have the day off today before they hit the ice for tomorrow’s re-match with the Predators at the MTS Centre at 12 noon here in Winnipeg.

Note II:  The Moose are in Wisconsin to take on the Admirals in Milwaukee at 6 pm CT.  The team got Chase De Leo back yesterday which should really help as they have been playing without some of their top forwards.

Note III:  The Illegal Curve Hockey Show moves from our usual 9 am slot to 1 pm for three hours of Winnipeg Jets and NHL talk.  Guests include Willy Daunic (Predators TV broadcaster), Andrew Gross (covers the Devils for The Record), Aaron Portzline (covers the Bluejackets for the Dispatch) and Dave Pagnotta (Editor-in-Chief of Hockey’s Lifestyle Magazine).

Sportsnet:  West Coast Bias (Grading Western clubs at quarter mark).  The good news is the Jets have the second best grade.  The bad news there are only four teams and the grade isn’t very high (although as George Costanza would say “it’s in the meaty part of the curve, not showing off, not falling behind“). 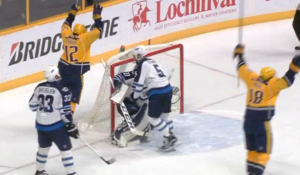 Winnipeg Sun:  Little inching closer to return with Jets.  If the above depresses you then this news can only make you happy.

Winnipeg Free Press:  Jets work to improve faceoffs.  The good news from last night’s contest was the team actually finished at the 50% mark for faceoffs.  The previous couple of games they were at 34% and 39%.

Winnipeg Free Press:  Jets fall to red-hot Preds 5-1.  Hard to label that road trip as anything other than disastrous and while it is still too early to write off the season the Jets have dug themselves a hole.

Winnipeg Free Press:  Bryan Little, out since season opener, could be back on the ice next week.  (Paywall).  Music to the ears of any Jets fans currently in the Music City or anywhere for that matter as the Jets are in desperate need to the type of veteran stability and skill that Little brings to this lineup.

The Tennessean:  Predators pile on Jets in 5-1 victory.  Always interesting to read a recap from a beat writer that covers the team the Jets just faced.

Sportsnet:  Should Brandon Tanev be suspended for hit on Colton Sissons?  (Video).  Seems to be a fairly even split in terms of respondents to the poll as to whether he should or shouldn’t be suspended.