The home and away teams have proven to be two different animals so far this season. 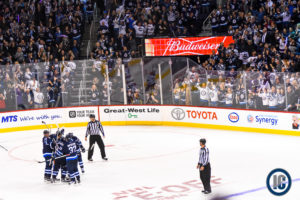 The home and away incarnations of the Winnipeg Jets have proven to be two different animals so far this season.  To this point after 23 games the Jets home and away records are as follows:

This has them currently sitting 11th in the Western Conference, sixth in the Central and three points away from the Dallas Stars for the final wild card spot.

The MTS Centre has been a place this Jets team hasn’t had many problems putting the puck in the net on a nightly basis.  In the ten games at home Winnipeg has scored 33 goals and allowed 23 goals against.

The story isn’t quite the same when they leave the 204 (or 431) area code.  In the 13 games away from home the Jets have only found the back of the net 27 times but they have allowed 44 goals against.

Interestingly, of the guys responsible for 39 of the 57 Jets goals this season (68%) a number have actually been more successful away from the MTS Centre:

They have managed to tilt the ice in their favour when it comes to peppering the opposition netminder with shots in a game when at home having taken 329 shots for while only allowing 304 shots against.

As you can probably sense the trend doesn’t continue outside of Winnipeg where they have taken 309 shots for but allowed 386 shots against.

There has been lots of talk lately about the Jets faceoffs woes and the importance of gaining possession of the puck from the moment the puck is dropped.  Winnipeg currently ranks 30th overall in the NHL with a 44.3% average.

As you might expect, here in Peg’ city the Jets have a 47.0% average.  Interestingly the best game came against the Leafs where they averaged 56.3% and the worst game they were a paltry 35.8% against the Hurricanes, although both ended up as Jets come-from-behind wins.

However it drops to a 41.8% average away from MTS Centre.  They only managed to hit 50% once against the Predators and the worst was 30.4% in that disastrous effort against Bruins.

When they are in front of the 15,282 lunatic fans with their chants and (shudder) the Wave, the team has been successful in intradivisional play.  They are a perfect three wins and zero losses against Dallas (twice) and Chicago.

However out on the road Winnipeg have only been able to put up a single win and single overtime loss (both in Colorado) while dropping four regulation losses in Minnesota (twice), Dallas and Nashville.

Despite the number of Jets fans who make their presence known during away games with their #TrueNorth shout during the Canadian Anthem and throughout the game this Jets team still hasn’t been able to find their grove when away from home.  If they want to be a playoff team in 2016-17 they are going to have to get this turned around and eliminate the Dr Jekyll and Mr Hyde factor of home vs. road teams.  Luckily for Winnipeg to close out November and in all of December they more home contests (9) than games on the road (7) which includes five vs Central (two home and three away).