Note:  Kicking off this tough road trip 0-2 is probably not how anyone envisioned it for Winnipeg but that is where they are following a 4-1 loss last night in Boston.  They won’t have any time to dwell on it however as they face a Carolina Hurricanes squad less than 22 hours after the game in Beantown.  The team will obviously not skate today and we will have to wait to see (based on warm-up skate) whether Drew Stafford is set to return to the lineup although we do know what the Hurricanes will look like tonight.  Puck drops at 4 pm and as always keep it locked to illegalcurve.com for pre and post game and on social media including via Twitter | Facebook | Instagram.

Note II:  There was a scary incident in Tucson last night where the Moose were scheduled to finish their five game road trip.  Roadrunners captain Craig Cunningham collapsed on the ice prior to puck drop and required medical attention.  The game was postponed and the Coyotes (parent club of Tuscon) released a statement saying that Cunningham was in hospital receiving medical treatment.  The Moose return to Winnipeg today where they have a short home stand against the Iowa Wild (22nd & 23rd) before going back out on the road.

News and Observer:  Canes get another shot at Jets.  Apparently that game one OT loss to the Jets at the MTS Centre is still stinging this young Hurricanes team and they will be seeking some revenge today at PNC Arena.

Winnipeg Sun:  Jets play dead against Bruins.  That may be the best headline to describe the anemic play we saw last night from Winnipeg.  Ken breaks it all down here.

Winnipeg Free Press:  Signs of trouble in loss.  (Paywall).   I always caution against getting too concerned over a few losses, especially when you consider this team was 4-0-1 in their previous five.  Jason breaks down the loss in this column recapping last night’s game in Boston. 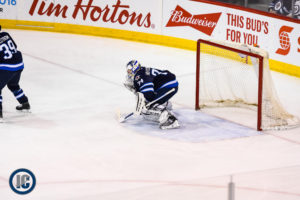 Winnipeg Free Press:  Happy with a heap of helpers.  (Paywall).  Ehlers has been excellent this season and he has become an excellent facilitator this season.

Sportsnet:  Paul Maurice blames self for Jets ‘not being prepared to play’.  Good strategy by a veteran coach attempting to shield his players from that loss.

National Post:  Jets limited to 12 shots in falling to Boston Bruins 4-1.  Captain Blake Wheeler said it best post-game “12 shots against 38. Probably not going to get it done” which as we saw last night is a fairly accurate statement.

NESN:  Boston’s offense comes to life in dominant 4-1 victory vs. Jets.  Always interesting to read about the perspective of a writer who covers the Jets opposition and how they saw the game.

TSN:  Jets fall flat in road loss to Bruins.  Somehow that headline seems like an understatement for what we saw last night.

NY Times: Off to flying start, Patrik Laine lifts spirits in Winnipeg.  As I’ve been documenting often in the Morning Papers and Afternoon Links it is pretty clear that this kid has captured attention from coast to coast.

Illegal Curve:  Drew Stafford and Bryan Little injury update.  We get an update from the Jets bench boss on the health of these two veteran forwards.

Illegal Curve:  Craig Button on Logan Stanley.  The TSN Director of Scouting joined us to talk about a variety of topics on yesterday’s Illegal Curve Hockey Show on TSN 1290 including how Logan Stanley, the Jets 2016 1st round pick (18th overall) was progressing.