Note:  Hard to believe that the Jets are getting ready to play game 15 on their schedule but that is exactly where we find ourselves today as Winnipeg is in Arizona to take on the Coyotes tonight in the first of a back-to-back.  Stick with illegalcurve.com for the latest news and on social media including Twitter|Facebook |Instagram for all the pre and post game news.

Note II:  The Moose will hit the ice at 1 pm for a practice at the Valley View Casino Center for a practice as they get ready to kick off the road trip San Diego tomorrow.

Metro News:  Jets have pieces set for exciting future.  I’m with Hustler on this one.  While you may not always be sure what you are getting with this squad there is plenty of excitement building around the games they are playing. 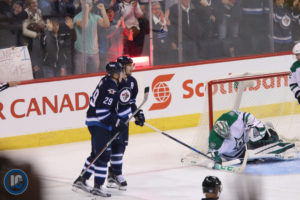 Winnipeg Sun:  Patrik Laine had his legs the whole time.  His answer to why he didn’t score in the pre-season was pretty classic.

Winnipeg Sun:  Five keys to Jets vs. Coyotes.  Ken sets you up for tonight’s contest which consists of these five things including: 1) Try to stop them. 2) Secondary scoring. 3) Riding the hot hand? 4) Defensive competition is on. 5) Domi dazzling.  Extra bonus:  Byfuglien vs. Ekman-Larsson.

Winnipeg Free Press:  McDavid has his eye on Scheifele’s scoring exploits.  (Paywall).  While the hat tricks by Patrik Laine have been impressive equally outstanding is the fact that #55 is atop the leader board in the NHL.  Not bad for a pick some crowed as a reach when the Jets took him back in 2011 in the 7th spot.

Winnipeg Free Press:  Laine calm, cool… and collecting goals at a torrid pace.  (Paywall).  You really do get the sense from being around this young star that he really isn’t phased by that much.

Ottawa Citizen:  Jets have found another Finnish Flash.  Plenty of folks from outside our fair city have turned their eyes to our prairie province to check out all the excitement at Portage and Donald.

Illegal Curve:  Jets Practice Report.  Just a handful of players took to the ice on Wednesday but we did hear prior to departure for Arizona from Mark Scheifele, Dustin Byfuglien Patrik Laine and Coach Maurice.

TSN:  That’s Hockey.  (Video).  After scoring his second hat trick of his rookie season, Patrik Laine joins Gino Reda to discuss his impressive start, where he believes he stands in the Calder race, playing with NHL leading scorer Mark Scheifele and says if the time was right he would drop the gloves.

TSN:  Sportscentre.  (Video).   Dave Poulin joins the show to discuss what is most surprising about Patrik Laine’s ability to score and why his chemistry with Mark Scheifele has been off the charts.

TSN:  Statistically Speaking – Laine living large.  Not just an article about the Jets high-flying rookie but he is the feature to open.  Also meriting comment is Jets top centre Mark Scheifele.

Sportsnet:  How does Laine’s hot start stack up to the greats?   I’d make a joke about Laine’s start being so hot that it is increasing the temperature in Winnipeg but since it was 17 degrees Celsius on November 9th the rookie may, in fact, be impacting the mercury.

Yahoo Sports (Puck Daddy):  Patrik Laine is pulling an Ovechkin on Auston Matthews.  While there is still plenty of season left it is pretty clear that the Jets rookie will be in the running all season long.

TSN 1290 Winnipeg:  Donvito Roundtable.  TSN Hockey Analyst Shane Hnidy recaps the Jets win vs. Dallas and looks ahead to the road trip in Arizona and Colorado.

Illegal Curve:  Manitoba releases Jiri Fronk from AHL contract.  Just a few days ago the young Czech forward was talking about playing in the AHL as long as he could and then yesterday the team releases Fronk from the AHL deal.