Note:  In case you missed it, the Jets announced yesterday that they have signed Jacob Trouba to a two year deal.  GM Kevin Cheveldayoff held a conference call and you can hear the entire 18 minute chat here.  Trouba may or may not be available today but regardless, I will be down at the MTS Centre covering the game day skate and will have all the latest for illegalcurve.com and on social media including Twitter|Facebook |Instagram for all the pre and post game news.

Note II:  In all the hysteria that Trouba has signed we probably shouldn’t lose sight that there will be a Jets game tonight as Winnipeg plays a lone home game before heading back on the road tomorrow.  The Dallas Stars are in-town with a 7 pm puck drop.  Update:  While Trouba and Stuart skated this AM the only ‘new’ face in the lineup tonight is Tyler Myers.  Pre-game report is here.

Note III:  The Moose have their final practice at the IcePlex today before they head out on the road for five games starting on November 11th in San Diego.

Today’s Slapshot:  Darren Dreger – Tim Hortons meeting helped turn tide in Trouba stalemate.  Is there anything Tim Hortons can’t do?  Aside from making a doughnut that is worth eating……

Winnipeg Sun:  Bridge deal works best for Jets, Trouba.  Ken offers his insight into the deal that was signed and caused huge waves around the city and throughout the NHL. 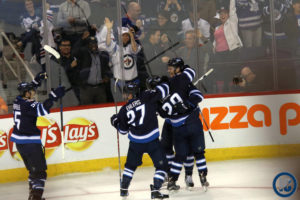 Winnipeg Free Press:  Short-handed Stars set sights on .500.  (Paywall).  If you can steal two points from a central division rival you had best take advantage of it.

Winnipeg Free Press:  Sleep or skate? Game-day ritual and science face off in NHL.  (Paywall).  Always interesting to see how teams try and gain an advantage off the ice.

NHL.com:  Jacob Trouba situation with Jets diffused for now.  Key words in the title of Tim’s piece unfortunately is “for now”. How long will this peace last?

TSN:  Where do Trouba and the Jets go from here?  (Video).  With Jacob Trouba agreeing to a deal with the Jets, will the team now actively look to trade him or will the two parties make up and carry on much like Jonathan Drouin did with the Lightning? That’s Hockey weighs in.

TSN:  Lawless not surprised Trouba finally signed with Jets. (Video).  Gary Lawless has more on how the Trouba deal got done.

Sportsnet:  How Jacob Trouba’s bridge deal stacks up.  Comparing how this deal compares to other bridge deals that have been signed recently.

Sportsnet:   Will the Winnipeg Jets now trade newly signed Jacob Trouba?  The ink isn’t even dry on the contract (presuming they used a quill and parchment) and there is already talk of dealing the defenceman.

Today’s Slapshot:  Elliotte Friedman on Trouba: ‘I don’t think he’s getting traded right away’.  Chris transcribes a chat that Friedman had on Toronto’s Sportsnet 590 about the Trouba situation.

Globalnews:  What should Winnipeg Jets rookie Patrik Laine’s nickname be?  Is ‘other’ a nickname choice?  I kinda like that one.

Illegal Curve:  Jets Injury Report.  Took a look at the Jets injury situation including how long they’ve been out and when they may be back.

TSN 1290 Winnipeg:  Hustler and Lawless.  Jets GM Kevin Cheveldayoff joined the guys in studio and discussed signing Jacob Trouba to a two-year $6 million contract. He also discussed the progress of the Winnipeg Jets this season.

Illegal Curve:  Jets GM Kevin Cheveldayoff converence call.  Topics in the call included: On getting the deal done.  Did he get a good feeling coming out of Detroit?  Did he agree in advance to sign Trouba and then immediately trade him?  Avoiding rancor between Jets and Trouba, how does he expect #8 to be welcomed back?  When does he expect Trouba to be in Winnipeg and when might he be in the lineup?  Where did they miss Trouba the most during his absence?  How were they able to get Trouba back in the Jets camp and has he rescinded his trade request?  On July 1st are they anticipating getting a long term deal done with Trouba?  On Trouba’s conditioning?  Did injuries on the back end or play of current D contribute to this signing?  How does his focus shift?  Any thoughts to moving Byfuglien to forward?  If Trouba comes to Winnipeg in great shape when might he be in the lineup?  What is the team’s role in getting Trouba back into the room and back with the fans?  Did he have opportunity to talk longer term deal or was focus on a bridge?  At any point in this process did he anticipate a trade happening?  How would he characterize his relationship with Kurt Overhardt?