Note:  The Jets dropped a tough one 3-2 last night to the Capitals with 30 seconds to go in the 3rd period.  Many fans were preparing themselves for OT when the puck crossed the line.  The Jets will be at the MTS IcePlex today to chat with the media before they leave for Washington for a re-match with the Capitals on Thursday night.

Note II:  The Moose will practice for a third day in a row.  They may be short a player depending on the prognosis of Jets winger Shawn Matthias who was forced to leave Tuesday’s game in the 1st period.  If the Jets make a recall my guess is Andrew Copp will be the one getting the call to join Winnipeg on their three game road trip.

Today’s Slapshot:  Dreger feels chances of Trouba being traded are slim.  Which means the TSN hockey insider has the same opinion as many of the participants of our Jacob Trouba poll.

Winnipeg Sun:  Ten things we’ve learned so far about the Jets.  Ted’s list includes 1) Mistake’s kill 2) Chasing the game 3) The kid is alright 4) So are the other kids 5) Who wants it 6) Bryan Little is a key player 7) Same old story 8) You must finish 9) Trouba Door open and 10) Time to cut bait.

ESPN:  No-quit Jets showed they are fun to watch in loss to Capitals.  Not sure how many Jets fans would take that as consolation. 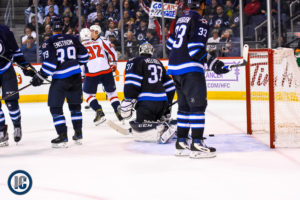 Winnipeg Sun:  Injuries piling up for the Jets.  Add Shawn Matthias to the laundry list of players the team has lost recently as it appears the Jets are getting younger and younger as they try to fill spots left by these veterans.

Winnipeg Free Press:  Last-minute letdown.  (Paywall).  Fans were aghast that the team had fought back to tie the game only to drop it with 30 seconds to go in the game.  Kinda has a Winnipeg Jets 1.0 feel to it.

Winnipeg Free Press:  Postma answers the bell.  (Paywall).  No better time for him to seize the opportunity while the Jets are rather bare in terms of depth on the back end.

Washington Post:  Jay Beagle saves the day for the Capitals against the Jets.  Read the game recap from the perspective of a Capitals beat writer.

Today’s Slapshot:  Jets keeping big picture in mind on Trouba trade front.  TSN hockey insider Darren Dreger was on TSN Vancouver 1050 yesterday and Chris has transcribed some of that chat.  Not sure fans want to hear or will accept “develop in a patient manner” at this point.

Illegal Curve:  Jets vs. Capitals post-game report.  We’ve encapsulated all the post-game reaction in one spot so you can hear reaction from Jets players (Lowry, Scheifele, Wheeler, Armia), Capitals players (Holtby, Johansson) as well as coach Maurice and coach Trotz.