Post-game from the Jets & Capitals dressing rooms as well as from both coaches. 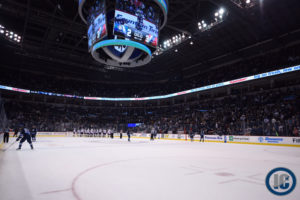 Jets fans left the MTS Centre somewhat shocked as the home side fought back from a two goal deficit to tie the game late in the 3rd period.  Adam Lowry was the hero as he deked around Capitals goalie Braden Holtby, who was phenomenal most of the night stopping 43 of 45 shots, to tie the game.  With time winding down in the 3rd Lowry lost a face off and the Capitals Jay Beagle grabbed a blocked shot from the point and scored on a screened Connor Hellbuyck with 30 seconds to go to give Washington a 3-2 lead.  A little bit of a tussle broke out that may continue when the teams face off again on Thursday in D.C.

Paul Maurice:  On Lowry being the hero with the game tying goal and then loses the draw.  Did he like the way his team played tonight?  Update on Matthias?  On the power play generating chances but not scoring.  What did he think of his goaltending tonight? Did he get an explanation as to why Jets didn’t get a penalty shot when Oshie covered the puck?

Barry Trotz:  Breaking down the game.  What did he learn about the Jets?  Johansson’s play.  Have they established an identity?  Last minute goals.  Alzner’s goal.