Note:  The Jets will take the day off today before they face Alexander Ovechkin and his Washington Capitals on Tuesday night at the MTS Centre.

Note II:  The Moose are back on the ice after they took Sunday off following a weekend sweep of the San Diego Gulls.  They now prepare to face defending Calder Cup champion Cleveland Monsters on Thursday and Saturday.

Winnipeg Sun:  Ovechkin goes from idol to peer for Laine.  Plenty of eyeballs will be watching #8 and #29 tomorrow when the Capitals and Jets face each other at the MTS Centre.

Illegal Curve:  Jets and Moose Halloween gear.  Check out some of the players from both squads in their costumes.

CSN New England:  Carlo shouldn’t be included in a trade for Trouba.  With all the buzz the Saturday night chat on HNIC generated Joe Haggerty who covers the Bruins doesn’t think that Boston management should be biting on this one.

TSN:  Trouba only has two choices.  But Bob I put three options in my poll not two.  $600,00.00 to date isn’t a small sum to have already lost and you would have to imagine he is constantly chatting with his agent as the time winds closer to that December 1st date.  Get the latest from hockey insider Bob McKenzie.

Winnipeg Sun:  Hutchinson pulled as Jets fall to Sabres.  Not a great month of October for this Jets team but anytime you lose a centre like Bryan Little you know it isn’t going to be good for business as Winnipeg ended the month on a losing note.

Winnipeg Free Press:  Rocky Mountain high followed by Prairie low. (Paywall).  One moment you can be a King slayer and then you can just as quickly be brought down to earth as Michael Hutchinson discovered this past weekend.

Winnipeg Free Press:  Sabres score early, hold on to beat Jets. (Paywall).  Jason provides this period by period breakdown of the game.  If only Nikolaj Ehlers had been able to punt that airborne puck out of the air, it may have been a more exciting conclusion on Sunday. 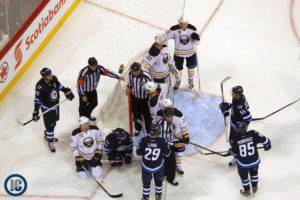 Buffalo News:  With season at early crisis point, Sabres respond.  Read about the game from the perspective of a Sabres beat writer.

Illegal Curve:  Tyler Myers out of the lineup with lower-body injury.  When we didn’t see him for pre-game warm-up yesterday we knew something was doing with the big defenceman.  Turns out he is day-to-day with a lower body injury.

Illegal Curve:  Saturday Headlines – Jacob Trouba and the Bruins.  There seemed to be quite a bit of interest so I’m including it again this morning.  For the third week in a row the Jets RFA defenceman made the headlines as they discussed whether Boston may be a good landing spot with the rumour that Ryan Spooner may be out of favour.

Illegal Curve:  Coach Paul Maurice post-game scrum.  Topics include Injury update on Myers.  Is Stafford available for Tuesday?  On the slow start for the Jets.  Going back to back with Hutchinson.  On pulling Hutchinson tonight.  How disappointed is he on losing to lose a “winnable” game? Thoughts on the top line when he flipped Ehlers and Laine?  Ehlers slow start to the season.  Changing complexity of the lines when he flips the wingers.  Overview of the nine games to start the season.

Topics: Jets-Avalanche Recap, The Latest on Jacob Trouba, Previewing the month of November for the Winnipeg Jets, Jets-Sabres Preview