Note:  The Jets will hit the ice for a skate at the IcePlex today at 11 am before the team departs for Dallas as they get ready for a rare home and home series with the Stars.

Note II:  The Moose returned home after being swept by the Marlies and now sit at 2-3-0-1 on the season (5th in the eight team Central Division).  The team has the day off today before they return to the ice tomorrow as they get ready to face the San Diego Gulls on Friday/Saturday.

Metro News:  Jets, Oilers among organizations leading the way in indigenous tributes.  If it can help raise awareness then it is a good thing.

CBC:  Best, brightest moments from Heritage Classic weekend in Winnipeg.  Just what the headline suggest as they look at losing never looked so happy, beer makes for ‘trip of a lifetime’, late starts, Gretzky ‘stinks’ and the Finnish Flash flies again.

TSN:  Winnipeg shines under spotlight of 2016 Heritage Classic.  As we have done since the Jets first left town in 1996 the people of Winnipeg have done a phenomenal job in hosting a major event.

TSN:  Winnipeg hosts a “five star” Heritage Classic.  (Video).  Despite a delayed start, the Heritage Classic was given a proper showcase, featuring two young rosters, and ending with an Oilers’ victory over the host Jets. Sara Orlesky, Darren Dreger and Gary Lawless have more from Winnipeg.

Sportsnet:  Dear Edmonton, I hate you. With love, Winnipeg.  (Video).  Throughout their shared history, first in the WHA and then the NHL, the Edmonton Oilers have constantly been the thorn in the Winnipeg Jets’ side. And yet, there is mutual respect to be found in their rivalry. 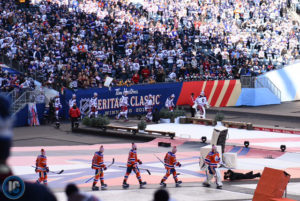 Winnipeg Sun:  No fairy tale for Jets.  While it would have been a cherry on top of what was a fantastic weekend, not many fans are losing sleep over the game.  That is until we get to the end of the year and see how this rather pedantic start to the year impacted whether they were above or below that playoff line.

Winnipeg Sun:  Unhappy ending for Jets’ Laine.  Something that I suspect we will be talking about a lot this season are the rookie teachable moments.

Winnipeg Sun:  Flat second period sinks Jets.  Ten goals against with only one goal for.  Does anything else really need to be said?  Well if it does Ken offers up his thoughts.

Winnipeg Sun:  Jets boss Chipman has reason to be proud of Heritage Classic weekend.  It was a weekend without blunder (aside from the loss) and everyone from the ownership to the security staff to the fans in the stands and all the folks in-between deserve kudos for representing our city well.

Winnipeg Sun:  Fan-tastic – Heritage Classic doesn’t disappoint.  It was a fan friendly weekend for all who came to our Friendly province. 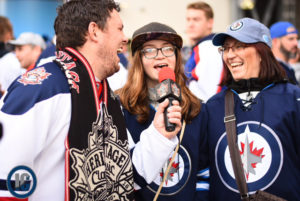 Winnipeg Free Press:  Heritage Classic all about our city’s healing.  (Paywall).  Melissa always spins a good yarn and this article is no different.  Be sure to give it a read.

Winnipeg Free Press:  Menacing Oilers forward thoroughly enjoys Heritage Classic.  (Paywall).  Milan Lucic must have loved the sound of the boards whenever a hit was delivered.

Winnipeg Free Press:  Jets build on heritage vs. Oilers.  (Paywall).  It was the only flaw in a spectacular week of celebrating hockey in the city of Winnipeg.

Edmonton Sun:  Letestu kicks off scoring as the Oilers down the Jets 3-0 at Heritage Classic.  Always enjoy reading the game recaps from the beat writers that cover the visiting team.  Interesting to read that Letestu chose to use same move on Hellebuck that he had in pre-season.

Globe and Mail:  Oilers leave the Jets depleted in Heritage Classic matchup.  Good recap of the game and weekend. 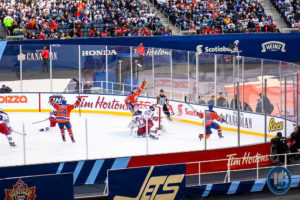 CBC:  Oilers take Heritage Classic, but fans make Jets coach proud to be in Winnipeg.  It was a win for the fan base.

Illegal Curve:  How Benny the Mascot found his way home to the Winnipeg Jets.  Had a little fun yesterday as I went on a quest to find out exactly how the Jets 1.0 old mascot had returned to the team after an absence of twenty years.

Illegal Curve:  Coach Maurice scrum.  Team didn’t seem to have stage fright, came out with a pretty good first, how did you see it go from there? How much of a downer did it (loss) leave them with? Ebbs and flow of the game, how do they get it ironed out? How does he work to get it solved? Balancing patience. Assessing the Oilers team. Leaving Thorburn and Stuart out of the lineup. Stand out memory. Home team’s lack of success in these outdoor games. Timing of this game, and the challenge it presents.

TSN 1290 Winnipeg:  Hustler and Lawless.  NHL Commissioner Gary Bettman and Winnipeg Jets Executive Chairman Mark Chipman join Hustler & Lawless ahead of the Heritage Classic to discuss bringing the outdoor game to the city, and the reaction to the week’s festivities by players, alumni, and fans.