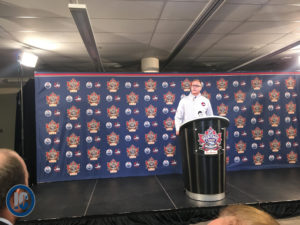 The Jets bench boss met with the media following his team’s 3-0 loss to the Oilers.

Scrum topics: Team didn’t seem to have stage fright, came out with a pretty good first, how did you see it go from there? How much of a downer did it (loss) leave them with? Ebbs and flow of the game, how do they get it ironed out? How does he work to get it solved? Balancing patience. Assessing the Oilers team. Leaving Thorburn and Stuart out of the lineup. Stand out memory. Home team’s lack of success in these outdoor games. Timing of this game, and the challenge it presents.

Via ASAP Sports here are the transcripts:

Q. Paul, your team didn’t seem to have stage fright. You came out with a pretty good first. How did you see it go from there?

PAUL MAURICE: It got into a bit of a lull in the second period, maybe for both teams, kind of the game evened out and it’s just the three turnovers, and then they’re obvious, and the result was emphatic. We wouldn’t like to think that’s part of our game. We’re seeing a fair amount of that early on but didn’t see it in the first — liked our game an awful lot in the first. We had three real good A chances that we didn’t convert on. Seemed to miss the net an awful lot, but those turnovers on good ice, bad ice, whatever, they’re going to be in your net.

Q. It’s quite a week here; how much of a downer does it leave you with?

PAUL MAURICE: I hope not too much. I hope — I certainly would have liked to give the fans at least one reason to get out of the seats today. We couldn’t do that for them unfortunately. But it was such a spectacular week here, especially for the city of Winnipeg, right from the gala, straight through, lots of enthusiasm, enjoyment, and overall it was a spectacular week and the event of our team, but the game was a tough one.

Q. Paul, seems within your games there’s a real difference in play from good to not so great at times. Is that hallmark of a young team? Why is that happening so often?

PAUL MAURICE: Wouldn’t say it’s a hallmark of it. I mean, we’re controlling the emotions of the ebbs and flows when you get going. We’re skating really well, and when we’re not — I don’t know, we’re still learning about our hockey team. We’ve got a bunch of guys, some veteran guys in new positions, new roles, some new guys in learning the league and what they can get away with and what they can’t get away with, and that’ll get ironed out.

Q. A number of your players after the game were talking about the goals against. It’s 19 in five games now, and that’s — a number of your guys said that’s not good enough in the NHL. How do you work to get that down?

PAUL MAURICE: The interesting — you look for themes first. Where are they coming from? They’re not really out D zone coverages. First two rushes against the first two, but we wouldn’t look at that as the problem with the turnovers. That would be the area of the game, the theme that keeps coming up. We’ve turned the puck over in some pretty high-risk areas and haven’t been able to shut those down.

Q. How do you balance patience so that young guys can grow and then trying to keep them — if you have to play well enough to earn your ice and stay in the NHL, how do you balance that right now?

PAUL MAURICE: Patiently. I mean, we are. We are putting players back out on the ice after they’ve made a mistake, and we’ll continue to do that. It’s early. We’ve had stretches of real solid and exciting hockey. We’ve had some stretches of hockey that we can’t have in an NHL game. But we make sure that we’re clear about what we’re doing. We make sure that we’re teaching and learning from those mistakes, but we do expect an improvement in some of the players.

We have to be really careful about always — not so much your question, always talking about the youth, right? This team is of a certain age. We have a few young players, got lots of veteran players here. It’s not always the kid. You’ve got to get the big guys driving, too.

Q. Earlier this week Jake Allen was quoted as saying that this was a completely different Oilers club than he remembers from previous years. What’s your assessment of this team from what you saw today?

PAUL MAURICE: I’ve got to be honest with you; it’s a tough assessment game, right, so you’re not sure about a lot of the things that happen on the ice for both teams. I think they’re far more dynamic with Connor McDavid in the middle. Leon Draisaitl for me is underrated based on our Team Europe experience. He was fantastic for us there.

Their back end isn’t — there isn’t as much risk off their back end up the ice so they’re a little more patient with that their game. Other than that, I can’t tell you. I’ve watched them play, pre scouted the games, but they’ve been young for a long time, and now some of their players are a little more mature, and Connor McDavid is a tipping point for any team. You put him on the ice and you’re a completely better team by his presence.

Q. Tough decision to leave Thorburn and Stuart out, was it, for you?

PAUL MAURICE: Yeah, very difficult, because for these two men, what they bring is beyond play. They’ve come to camp, they’ve had good camps, came off a game that the result was good. We liked their game. We’ll always make — we’re not going to hold the lineup in every time just because it’s one. But at the end of the day, I’ve leaned toward youth from the start of the season, and the question Gary asked earlier about at what point will you start making adjustments, and it won’t necessarily be the youth dealt with any differently than the veteran players, and they’ll get an opportunity to come back in. They’ve handled it exceptionally well, not easily but exceptionally well, and yeah, it was a very difficult decision.

Q. What do you think will stand out in your memory most about what happened here this weekend?

PAUL MAURICE: I have a picture in my head of yesterday’s game and the True North champ that came during the National Anthem, but I happened to be standing behind Mark Chipman who was standing down two or three rows taking it all in, and what I will remember the most is wondering in my own head if he understands, and I’m sure he does, but he’s such a humble man, I don’t know that he does, the impact that he had on the community. I wondered if in the inaugural game of the Manitoba Moose years ago if that hard work would come to this in a really short period of time. I’m just really proud to be here.

Q. The NHL has been doing these outdoor games for about 13 years and has played — I think this was game No. 19, and the statistics are not flattering to the home teams at all. I think the home teams have only won five of them. Do you think it’s because possibly the home team has trouble handling the pressure from tens of thousands of people that are watching?

PAUL MAURICE: I don’t think it’s a pressure thing at all. I think you can take that stat sometimes to the — the home teams have a tendency to want to put on a show a little bit, and it was the best outdoor ice I’ve ever skated on in my life, still not quite NHL normal rinks, and we did some things with the puck that the home team wants to do to make a play, and the visiting team got it right, keep it simple, keep it north and keep it going to the net and just wait for a bobbled puck or a broken play. No, no pressure. We came out of the gate, certainly if we had the first period, flipped those and the second was our first, I might have thought so, but we played our best hockey in the first 20, all fired up for them, and couldn’t get it to go.

Q. Just the timing of this game so early into the season, how do you view that kind of challenge for your team this early with kind of all the attention?

PAUL MAURICE: It’s a great challenge. Especially coming off our Wednesday game with, like I said earlier, in a positive way. There’s a bit of a circus atmosphere that’s been in town for five days with the hockey that’s been played. We don’t want to shy away from that. We want to embrace that. We want to become a team that plays in these kind of meaningful, exciting, and at some point pressure-filled games. The fact that it was early in the year, I thought it was great. It was great to have it here. The timing was right. I know it got off to a little later start than they wanted, but the climate was fantastic out there. The ice was just exceptional for an outdoor rink, and it was great for the city of Winnipeg. I think all of you would agree. We showed ourselves in a very positive light. It’s an exciting place to live and work. It’s a great place to play hockey. The fans are spectacularly enthusiastic about the game here, so it was a wonderful week for us.