Note:  The first day of the NHL season is finally upon us.  Are you ready Winnipeg?  The wall-to-wall coverage of the Jets is already well underway here on site.  Keep it locked to illegalcurve.com and on social media including Twitter| Facebook | Instagram for all the latest Jets news.  Today the team will hit the ice for a skate at 11 am at the IcePlex as they get ready for the home opener against the Carolina Hurricanes tomorrow night at 7 pm.

Note II:  The Moose made some moves as they get ready to start the AHL season which begins on Friday.  They will be in Iowa for their first two games.  Prior to leaving the city they will have a skate today at the IcePlex at 12 pm.

ESPN:  Ranking every starting goaltender by tiers.  (Paywall).  The rating system uses a 1 to 5 scale (with 1 being the highest).  The panel includes three NHL team executives, four NHL coaches, two NHL scouts and former Blues goalie coach Corey Hirsch.  Hellebuyck is in the fourth tier by their standard.

TSN:  Which Canadian teams have the best shot at the postseason?  Jets are given a 45% chance.  They take a look at Why they’ll make it, Why they won’t and Potential Fallout.

Winnipeg Sun:  Jets hope youth movement will fuel rise in standings.  The team is getting younger and younger and we shall see how that impacts them when the are up against some of the other veteran NHL rosters.

Winnipeg Sun:  Young stars will make Jets contenders … eventually.  So they may gel and kick start the season with a bang or it may take awhile.  Got it.

Winnipeg Free Press:  Jets fired up, ready for takeoff, pilot Maurice says.  It is certainly going to be an October in ‘Peg City.

Illegal Curve:  Behind the Mask with Jets goalie Michael Hutchinson.  A little insight into the design of Hutchinson’s helmet.

Illegal Curve:  Jets rookies get new numbers.  Hopefully you didn’t prematurely get your Josh Morrissey and Kyle Connor jerseys yet.

ESPN:  Top Storylines of 2016-17.  Fourth story is ‘The Jets knew he was Trouba when he walked in’ about the currently sitting RFA and the ramifications to Winnipeg.  Worth noting this is Jets sixth not fifth season (where does the time go as an aside) in Winnipeg.

Winnipeg Sun:  Heritage Classic challenge underway, for IGF and NHL staff.  It really seems to be setting up for one hell of a weekend.

TSN:  Jets enter season with youthful roster.  An analysis of the Jets roster. 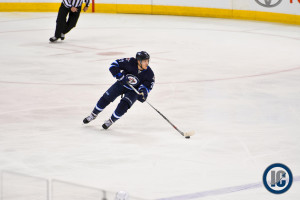 Sportsnet:  Trouba, Jets still at loggerheads.  (Video).  John Shannon talks about the situation and discusses the fact that multiple teams are interested in the Jets defenceman.

Winnipeg Free Press:  Jets hoping this season is a young man’s game.  (Paywall).  The youth movement is alive and well on this team.  Will that be a pro or a con?  We will find out.

TSN:  10 NHL rookies to watch this season.  Not a surprise that Winnipeg has two players on this list.

TSN:  31 bold predictions.  I will make a bold one of my own…no chance Hellebuyck is anywhere but in Winnipeg to start the 2016-17 season.

Illegal Curve:  Behind the Mask with Connor Hellebuyck.  I went one on one with the Jets netminder to find out how he came up with the design for his helmet.

Illegal Curve:  Projecting the Jets 2016-17 lines.  With the 23 man roster set we examine some possible line combinations that Jets bench boss Paul Maurice may use on Thursday against the Hurricanes.

The McGill Tribune:  In conversation with Winnipeg Jets’ Assistant Coach Jamie Kompon.  The article is about a week old but it isn’t time sensitive.  Simply a chat with the Jets new assistant coach.

TSN 1290 Winnipeg:  Hustler & Lawless.  Stephen Whyno of the Associated Press joins Hustler & Lawless to preview the NHL season. Whyno discusses the move to younger rosters, and looks at the changes in each division.

TSN 1290 Winnipeg:  Donvito Roundtable.  Jets Analyst Trevor Kidd discusses the Winnipeg Jets decision to send Ondrej Pavelec to the AHL and how the Jets goalie situation will shake out this season.

Illegal Curve:  Moose assign goalie Jamie Phillips to the Tulsa Oilers.  With Ondrej Pavelec joining Eric Comrie it made sense that Phillips would go down to the ECHL where he will get a chance to play some big minutes with the Oilers.

Winnipeg Sun:  Andrew Copp finds himself down on the farm.  I heard a motivated young man yesterday who seemed prepared to turn this ‘negative’ in his favour.  He will be a player worth watching on the Moose.

Winnipeg Free Press:  Pavelec saw the Moose writing on the wall.  (Paywall).  When Hutchinson got that third start of the pre-season instead of Pavelec getting his second this past Saturday in Minnesota it seemed inevitable that the Jets were moving on from their former #1 goalie.

Illegal Curve:  Four Jets clear waivers and report to Moose.  At 11 am CT on Tuesday we learned that all four the Jets players (Pavelec, Peluso, Melchiori and Strait) that needed to clear waivers had and then joined the Moose for practice.

Illegal Curve:  Brendan Lemieux re-assigned.  He had been recovering from an injury suffered at the Young Stars tournament in B.C. and was the last player from the Jets roster as they got it down to the requisite 23 by 4 pm CT yesterday.  When healthy he will be a player in the mix to challenge for a spot with Winnipeg.

Illegal Curve:  Day 9 of training camp.  Plenty to hear from Ondrej Pavelec, Andrew Copp, Eric Comrie and coach Pascal Vincent.  Really worth listening to these interviews for some interesting insight from these guys.