Note:  The Jets had the day off yesterday and will hit the ice for a skate at 11 am.  The Jets sit with 32 players (20F, 9D and 3G) and have until tomorrow at 5 pm ET before they have to set their roster.  We will have to wait and see if they make some more moves today.  I will be down at IcePlex to cover the latest news so keep it locked to illegalcurve.com and on social media including Twitter| Facebook | Instagram for all the latest Jets news.

Note II:  The Moose finished the weekend winless after they lost the I29 battle with the Iowa Wild in Fargo on Saturday (4-3) and in Grand Forks on Sunday (3-2).  They will have the day off today before returning to practice on Tuesday at 12 pm.  They spend the rest of the week in Winnipeg before they start their AHL season on Friday against this very same Wild team in Iowa on the 14th.

Winnipeg Sun:  Hutchinson, Hellebuyck to share duties.  Coach Maurice was cagey when asked how he would play his goalies this season.

Sportsnet:  Youth movement is alive in Winnipeg as Jets open season.  Add another whack of rookies to the Jets mix and you have a recipe for a very young squad.  Clear from what coach Maurice said today that he will lean heavily on the vets to help get the rookies acclimatized to the NHL.

Illegal Curve: Jets re-assign eight players.  In order to get down to 23 active players the team needed to make these moves but some of the names on the list were surprising and one that got the entire city talking was long-time goalie Ondrej Pavelec.

Illegal Curve:  Coach Maurice scrum.  Plenty to hear from the Jets boss after the team made a number of cuts. 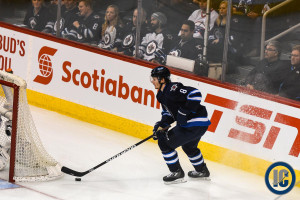 NHL.com:  5 Questions for the Winnipeg Jets.  Still seems odd when I see an NHL.com article written by Tim Campbell (formerly of the Winnipeg Free Press) but Tim examines five questions in this piece including: 1) Who will stop the puck? 2) Can special teams transform from liability to asset? 3) How will the Jets navigate the Central Division? 4) Can Winnipeg add more youth and improve? and 5) How long will the Jacob Trouba saga linger?

Winnipeg Sun:  Let the debates begin before Jets trim roster.  Like many out there are trying to do Ken gives his thoughts on how the Jets will get down to 23 players by Tuesday.

Part 1:   Expectations for the Winnipeg Jets.  A look at the forwards, defence and goalies.  Interviews with Jeff Hamilton (Winnipeg Free Press) and Kevin Allen (USA Today).  To listen click here.

Part 2:   Preview of the NHL season going division by division, team by team.  (Atlantic Division carried over till next weekend).  Interview with Eric Duhatschek (Globe and Mail).  To listen click here.