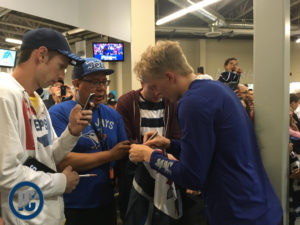 The NHL season kicks off on Wednesday and as per usual the Las Vegas odds are out in advance of the first game.  One of the futures bet is on the points expectations for a number of players including Jets rookie Patrik Laine.

Vegas seems to think that the Finnish Flash 2.0 will finish somewhere in the neighborhood of roughly 40 to 41 points as they have set the over/under at 40.5.  This is slightly less than the 132 points the original Finnish Flash Teemu Selanne finished with in 1992-93 (which of course is not a fair comparison for a number of reasons).  The Vegas folks have also projected that Laine’s rival from the 2016 draft Auston Matthews will finish approximately twelve points higher setting his over/under at 52.5.

In terms of Jets rookie points for their past top picks:

What do you think?  Would you put your money down on that?  Do you expect Laine to be the top rookie points producer on the Jets?  Or might we see fellow rookie Kyle Connor usurp that position?