Note:  The Jets will hit the ice at the IcePlex at 10 AM for a skate before they depart for Edmonton.  They will take on the Oilers at 8 pm.  As per usual we will be covering the game so keep it locked to illegalcurve.com and on social media including Twitter| Facebook | Instagram for pre and post game news.

Note II:  The Moose are on day four of their camp at the IcePlex.  They will hit the ice for 11 am for their skate.

Winnipeg Free Press:  Maurice has lots of talented options to fill Jets roster spots.  (Paywall).  Next two games and the remaining practices will be interesting viewing as players try to snag those remaining roster spots.

Winnipeg Sun:  Battle for spots on Jets roster heating up.  Coach Maurice provided some hope to players on the bubble and fighting for the chance to stay up with the big club.

Sportsnet:  Ranking the top 20 defencemen in the NHL, by the numbers.  You won’t have to scroll down far to find which Jets defenceman cracked the list.

NBC Sports:  The Jets goaltending situation still seems like kind of a mess.  Today’s audio with the Jets bench boss (which you can hear here) doesn’t really bring any more clarity as coach Maurice continues to hold his goaltending cards close to his vest (provided he wears a vest).

CTV News:  New season, new sound thanks to organ at Jets games.  Fans sure seem to be loving the new organ.

Winnipeg Free Press:  Armia turns heads with defensive play, offensive upside.  (Paywall).  He was one of the pieces that came back from the Kane/Bogosian trade to Buffalo that some fans thought could be a really nice piece to the Jets puzzle. 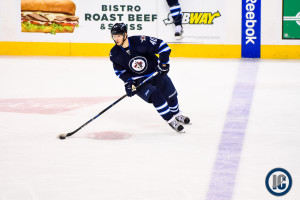 Winnipeg Free Press:  Jets could face growing pains.  (Paywall).  We’ve been learning for last season or two that the kids are alright and this upcoming year we will really learn if that is accurate.

Winnipeg Sun:  Pavelec determined to block out distractions.  Not really surprised that the longtime Jets starter isn’t going to concede anything.  While he may or may not be in the Jets future he would likely still like the opportunity to play well and sign with another team next season.

Winnipeg Sun:  Jets could decide to keep 3 goalies.  I would be very surprised if the team kept that many goalies to start the season.  Not only would it make juggling the forwards/defence a bit more difficult there are only so many games to play.  It is sometimes difficult enough to get two goalies enough starts and this would be too many cooks in the kitchen in my opinion.

Globalnews:  Connor Hellebuyck’s new mask a tribute to Dan Snyder.  Fans were impressed when the young netminder asked the Snyder family to use their son’s number (which included a stitched Snyder patch in the back of the jersey) and now he has added this tribute to his helmet.

Metro Winnipeg:  Jets top brass have tough decisions to make.  Hustler writes about the influx of talent arriving in the organization to compete for NHL jobs has made for a very different September in comparison to past years.

Illegal Curve:  Day 13 of Training Camp.  A look at the lines and D pairs that coach Maurice used in the skate at the IcePlex yesterday.  Also includes audio from Bryan Little, Blake Wheeler, Dustin Byfuglien and coach Maurice.

Illegal Curve:  Which NHL teams are in the running for Winnipeg Jets RFA Jacob Trouba?  A look at a number of the teams in the NHL that are in the hunt for the Jets RFA.

TSN 1290 Winnipeg:  Hustler and Lawless.  Dennis Beyak joins the guys to discuss the lines that came out of Wednesday’s Jets preseason practice, and talks about the competitions left as nine players still have to be cut for the final roster.

Manitoba official site:  Injury provides Baker motivation.  He was settling in nicely with the Moose last season before the injury took him out.  Mitch writes about his preparation for the upcoming season.

Illegal Curve:  Three Jets placed on waivers clear; Will report to Moose.  Quinton Howden, J.C. Lipon and Brenden Kitchton had to clear waivers which they did at 12 pm eastern yesterday meaning they would be able to report to Manitoba.

Illegal Curve:  Jets re-assign Ryan Olsen to the Moose.  He played 65 games for Manitoba last season (chipping in six goals and seven assists) and will get his chance to ply his trade in the minors to kick start the season.