Note:  It has been quite a few days here in ‘Peg city since the Jacob Trouba trade request first went public on Saturday night.  Yesterday his agent Kurt Overhardt was interviewed on Hustler and Lawless (listen here) about the trade request.

Note II:  Day 5 of training camp will also see the first pre-season game as the Calgary Flames are in-town to do battle with the Jets at the MTS Centre with puck drop at 7 pm.  As always we will be covering the game and as always stay tuned to illegalcurve.com and on social media including Twitter| Facebook | Instagram for pre and post game news.

Winnipeg Free Press:  Lots of new names on Jets jerseys tonight.  (Paywall).  These pre-season games will be a good opportunity for players to get noticed by the brass.

Winnipeg Sun:  Roslovic set to make pre-season debut for Jets.  He is definitely high on my list of players to watch tonight.

Edmonton Journal:  Three reasons why the Oilers don’t appear to be major players for Jacob Trouba.  Dave Staples takes you through the reasons why Edmonton may be not be a front runner for the prized young defenceman.

Winnipeg Sun:  Ken’s Notebook.  Includes: Scheifele learns a lot at World Cup, Byfuglien speaks from the heart, Laine turns heads, Lipon feels time is ticking and Kompon not conflicted about who to root for. 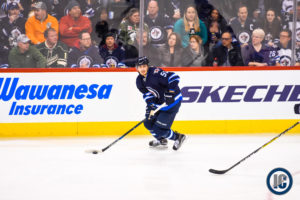 Winnipeg Free Press:  Agent adamant Trouba wants trade.  (Paywall).  It really is amazing how we went from the cone of silence to today’s full court press.

Winnipeg Free Press:  Laine trying to deke hype, take aim at roster spot.  (Paywall).  Considering some in this city are placing the mantle of 76 goals on the kid, perhaps setting the bar a little lower is a smart decision.

Winnipeg Free Press:  World Cup done, Jets players glad to be back at work.  (Paywall).  Players, for the most part, were happy to gain the experience but are clearly ready to get the season started.

TSN:  Trouba has the makings of a first-pairing talent.  The numbers are good for Trouba but will that translate into a big trade?

Toronto Star:  Leafs could have the pieces to deal for Trouba.   Cox throws the Leafs into the fray as a potential suitor for young Jacob Trouba.

Winnipeg Sun:  Leadership group weighs in.  Welcome back to Winnipeg now let’s discuss the fact that a top young defender wants out.  Not exactly how players want to begin the 2016-17 campaign.

Winnipeg Sun:  Great expectations – Laine joins first Jets practice.  It was an interesting chat with the Jets top pick this past summer as he got his first real taste of Jets training camp.

Winnipeg Free Press:  Breaking up is hard to do for Wheeler, Byfuglien.  (Paywall).  Not a surprise that players are lamenting the loss of the talented young defender and are hoping that there is still a chance he may return to play for the Jets.

Sportsnet:  Cheveldayoff’s history of patience a key in Trouba trade request.  Be prepared to wait is what I’m taking from this article by Sean.

Today’s Slapshot:  Jets may seek ‘high-impact’ one-for-one Trouba trade.  Chris has transcribed chats from TSN hockey insider Bob McKenzie that he had on TSN 690 Montreal and TSN 1260 Edmonton on the Trouba situation.

TSN 1290 Winnipeg:  Hustler and Lawless.  Jacob Trouba’s agent, Kurt Overhardt, joins the guys to discuss his client’s decision to sit out of Winnipeg Jets training camp after requesting a trade. Overhardt says the trade request going public is not a negotiating ploy, and says they have not been able to negotiate a contract with the Jets.

TSN 1290 Winnipeg:  Hustler and Lawless.  TSN Hockey analyst Dave Poulin joins the guys to discuss Jacob Trouba’s trade request. Poulin says that, because of the CBA, Jacob Trouba is unable to sign where he pleases, and says that Trouba must earn his position on the Jets team.

TSN 1260 Edmonton:  The Jason Gregor Show.  Dennis Beyak, voice of the WPG Jets joined Gregor to discuss the news that Jacob Trouba has requested a trade.

TSN 1260 Edmonton:  Nelson & Fraser.  TSN’s Ryan Rishaug joins the show for ‘The Morning Mandate’ in which he goes over the Jacob Trouba trade request and how aggressive the Oilers should be in pursuing him.

TSN 1290 Winnipeg:  The Big Show.  TSN’s resident scout and former NHL GM Craig Button gave his thoughts on the Jacob Trouba trade request on the Big Show including whether or not Trouba is making the right move and how Kevin Cheveldayoff should react going forward.