ESPN:  Dustin Byfuglien has rallied big to be a key D-man for Team USA.  Big #33 gets some focus as the tournament gets underway. 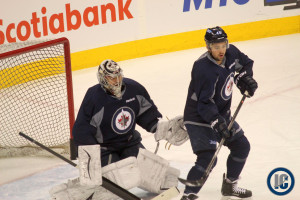 Winnipeg Free Press:  No fireworks for Laine in World Cup exhibition game.  (Paywall).  Is it time to panic?

TSN:  Laine not satisfied with debut against Sweden.  (video).  Patrik Laine says he was not pleased with his “pro” debut, but was happy that Finland came away with a 3-2 overtime win against Sweden in their first exhibition game ahead of the World Cup of Hockey.

ESPN:  Is Patrik Laine the next Finnish Flash?  How many times will this headline or comparison be written over the next year?  A good read from Finland on the Jets top prospect.

Illegal Curve:  Jets and Oilers fill out remaining Heritage Classic Alumni rosters.  Will Eddie O bring back the Titan?  You also get half of the goalie duo Pokey and the Bandit.  All the new additions for both squads are listed.

TSN 1290 Winnipeg:  Hustler and Lawless.  Former NHL player Devin Setoguchi joined the guys to share his decline into alcoholism while playing professional hockey, how he has begun to turn things around, and how his Winnipeg Jets teammates attempted to help him.