The Hockey News:  Jets pick Erik Foley is turning heads with Team USA.  While we usually think of August as a quiet time (exception being the Heritage Classic news), over in Michigan they are playing the National Junior Evaluation Camp (NJEC) and the Jets pick in the 3rd round (78th overall) of the 2015 draft is getting noticed. 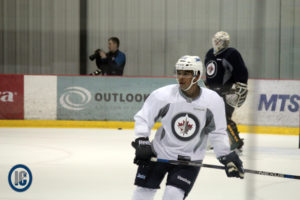 TSN 1290 Winnipeg:  Blake Wheeler on Hustler and Lawless.  Chatted about the upcoming Heritage Classic and NHL season. Wheeler also shares his thoughts on the Jets drafting Patrik Laine and the upcoming World Cup of Hockey.

TSN 1290 Winnipeg:  Mark Chipman on Hustler and Lawless.   Jets co-owner joined the show to talk about the Heritage Classic rosters and reasoning behind hosting the roster & jersey announcement at Winnipeg’s iconic Portage & Main.

TSN 1290 Winnipeg:  Dale Hawerchuk on Hustler and Lawless.  He spoke about putting together the Jets alumni team for this fall’s Heritage Classic.