Jets official site:  Dustin Byfuglien – One of a Kind.  Getting to know big #33. 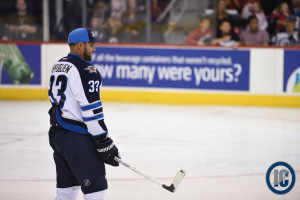