Note:  Day 4 of Jets Development Camp gets underway at the IcePlex with the prospects having an amalgamated skate at 10:15 am.  Update:  Hear from Brendan Lemieux and Jansen Harkins who spoke following skate.  You can also read some quick takes on some of the prospects who skated today.

Winnipeg Free Press: Jets prospect making adjustments on and off the ice.  Spacek is a prospect many are keeping their eye on as his development path continues this year.

Macleans:  Len Kropioski is an optimistic Winnipeg Jets fan.  Fans always enjoy reading about one of their favourite people inside the MTS Centre and will be happy to read that he has signed up for another five seasons of Jets hockey.

McKeen’s Hockey:  NHL Draft Review and Grades.  Once again the Jets scouting staff getting high grades for their drafting.

Winnipeg Free Press:  Erik Foley lights it up in D-Camp intrasquad game.  (Paywall).  This and a number of other topics covered by Tim after another day of Jets Development Camp.

Winnipeg Free Press:  New Jets hire has proven track record.  (Paywall).  The new hire certainly has a wealth of experience he will bring to the job. 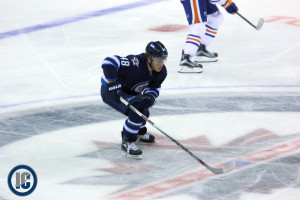 Winnipeg Sun:  Kompon makes solid impression.  Ken brings you this article on the new Jets assistant coach who met with the media for the first time yesterday.

Global News:  Jack Roslovic and Erik Foley pace Team White to overtime victory.  And you thought hockey season was over.

Illegal Curve:  Coaches Paul Maurice and Jamie Kompon.  The Jets bench boss and his new assistant coach spoke yesterday about a number of topics during the third day of Development Camp.

TSN 1290 Winnipeg:  Hustler and Lawless.  Jamie Kompon discusses his new position as Winnipeg Jets Assistant Coach and what he sees from the team’s roster.