Note:  Day 2 of Development Camp kicks off with both Group A and Group B hitting the ice for on-ice testing at 9:45 am.  I will be down for quite a bit so be sure to follow us on our various social media platforms including twitter@illegalcurve and instagram.

Winnipeg Free Press:  Talented Connor is one cool customer.  (Paywall).  He has certainly benefited by all the Laine talk as it will make his transition to the professional game that much easier. While it won’t be easy it has certainly removed some of the pressure he would likely be under if he was the only high valued prospect moving into the Jets fold.

Winnipeg Free Press:  Fans catch their first glimpse of Jets phenom Patrik Laine.  (Paywall).  He was incredibly accessible to all fans, young and old.  We were wondering where he was as he was scheduled to speak to the media but he was making his way across the IcePlex signing autographs for all the fans.

Winnipeg Free Press:  Laine signs on the dotted line with the Jets.  (Paywall).  While we were watching him sign autographs for fans at the IcePlex it turns out that a bit earlier he had signed his first NHL contract with the Jets.

Winnipeg Sun:  Jets sign Laine.  And when word started to spread that he would share his bonus with his parents (you can hear the full audio below) the internet started to buzz.

Winnipeg Sun:  Connor believes he’s ready.  While I may believe that the pressure will be less on the 2015 1st round pick with Laine in the fold he isn’t allowing it to change his focus.  Ken also writes about new goalie Jamie Phillips, new assistant Moose coach Eric Dubois and around the glass (injured prospects). 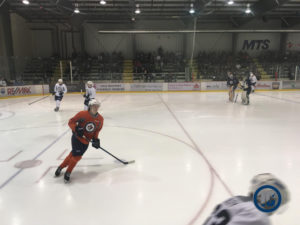 Illegal Curve:  Group A.  Hear from Kyle Connor and Jamie Phillips as the 2015 1st round pick and 2012 7th rounder spoke to the media following the skate at MTS IcePlex.

Illegal Curve:  Patrik Laine.  Lots to digest from the 2016 second overall selection by Winnipeg as he spoke about being in the city, signing his contract, World Championship, his injury and a lot more.

Illegal Curve:  Assistant coach Eric Dubois.  The newest member of the AHL affiliate spoke to the media during day 1 of Jets Development Camp.