Note:  It was an eventful two days in Buffalo, NY as Ezra and I covered another NHL Entry Draft.  There was a different buzz both in the building and online as Jets fans prepared for their home team to select Patrik Laine with the second overall pick.  Just because the Entry Draft has ended and summer is officially here doesn’t mean that we are on vacation.  In fact we are in the courting period for free agents before July 1st when teams can sign free agents and then we turn our focus to the Winnipeg Jets prospects who will descend on the city for camp which goes from July 3rd until July 7th.

Winnipeg Free Press:  He knows that first-round feeling.  (Paywall).  Scheifele can empathize with what Laine is going through as a top pick with high expectations on your shoulders.

Winnipeg Free Press:  Great things expected of Laine… in time.  (Paywall).  Whether he scores ten pre-season goals or zero the Jets bench boss won’t get too high or too low with the future of his team’s top pick.

Winnipeg Free Press:  Jets select four more names in draft.  (Paywall).  While we met only two of them yesterday in Buffalo the Jets added more talent to the stable.

Winnipeg Sun:  Draft done, it’s free-agent time as Jets shift focus.  Now that the draft is over Jets fans will turn their attention to filling the rest of the problem areas on this team with a potential UFA. 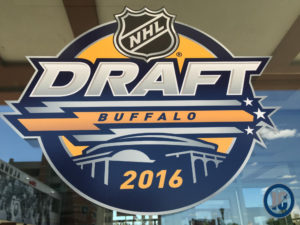 Winnipeg Sun:  Jets stocking up on Day 2 of NHL Draft.  There was quite the run on adding some defence to the prospect pool.

Iltalehti:  Patrik Laine says Winnipeg Jetsiä – in one case, the NHL’s best.  (Finnish newspaper).  I sat with Vesa at the draft and he had plenty to say about Laine.  This article details (use google translate) what Patrik Laine thinks of the Jets uniform.   If you want a good Finnish resource for Laine articles you should peruse his publication.

TSN 1290 Winnipeg:  Hustler and Lawless.  TSN Hockey Analyst Dave Poulin joins Hustler & Lawless and looks back at the first round of the NHL Draft and discusses the Winnipeg Jets selections.

TSN 1290 Winnipeg:  Hustler and Lawless.  Executive Chairman Mark Chipman joins Hustler & Lawless and discusses his experience at the Draft Lottery, the Jets first round selections and what the future holds for the franchise.

Illegal Curve:  Coach Maurice.  Audio and video of the Jets bench boss who kicked off the second day of the draft with a scrum during Round 2 when the Jets were without a pick.

Illegal Curve:  Luke Green.  Audio and video of the Jets 3rd round pick as the right shooting defenceman from the Saint John Sea Dogs of the QMJHL met with the media following his selection.

Illegal Curve:  Jacob Cederholm.  Audio and video of the Jets 4th round pick as the team added another right shooting defenceman from HV71 of the Swedish Hockey League met with the media following his selection.

Illegal Curve:  GM Kevin Cheveldayoff.  When the Jets traded their 7th round pick to the Habs it meant they were done drafting and the Jets GM met with the media to close out the 2016 NHL Entry Draft.  Contains both audio and video.

Illegal Curve:  Complete recap of the 2016 NHL Draft by the Jets.  The picks, their social media handles as well as links to all the media we did during the weekend.