Contenders or pretenders? Quick break and back at it. New Jets nothing like the old Jets. Jets snapshots. Real work begins now for Jets. ‘Twas the night before Christmas. Noel not a fan of NHL reality TV. Every day is Christmas. Jets/Penguins game recaps, audio.

Note:  The Illegal Curve Radio Show is on holiday break today, returning next Saturday, December 31st.  Tune into the Big Show all next week from 6-9 am as it is being re-dubbed the Illegal Curve Morning Show as we give Troy Westwood, Jay Richardson and Matt Leibel a bit of a breather.

Winnipeg Free Press:  Contenders or pretenders?  Jets fans got a little taste of reality last night.  In the Jets defense they played a tight game with the 5th place Penguins until the 3rd period when fatigue caught up to them.  Of course offsetting that factor was a lack of #87 on the Pens side.  The good news is this team will battle every night to try and win, something fans here in Winnipeg can appreciate. 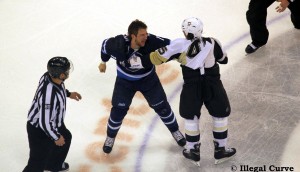 Winnipeg Free Press:  Quick break and back at it.  Two days is not much time to recharge the batteries.  However whether the guys are enjoying a Swedish Christmas at the Steen’s, heading to Saskatchewan to be with family or sticking in Winnipeg to relax, it is an opportunity to take their minds of hockey and get ready to get going again on Monday.

Winnipeg Free Press:  New Jets nothing like the old Jets.  I had a discussion yesterday about the various revenue streams that True North can avail themselves of to ensure long term stability of the franchise and Geoff Kirbyson nicely lays out all the reasons why this team will be here for the long term.

Winnipeg Sun:  Real work begins now for Jets.  There is a lot of hand wringing but was mentioned during the scrum with Tanner Glass last night, this team hasn’t exactly had a bad December.  They are 7-2-0-1 at home with the 1 road loss in Detroit and they still have games against the Avalanche (27th), Kings (29th) and Leafs (31st).

Winnipeg Free Press:  Noel not a fan of NHL reality TV.  It is a shame as fans would absolutely love seeing Claude Noel’s dry sense of humour on the tele.

Winnipeg Free Press:  Every day is Christmas.  Randy Turner brings you some thoughts from the Jets #1 draft pick in the 2011 Entry Draft.

Illegal Curve:  Post-game podcast.  Ezra, Dave and Michael give you their impressions of the game from the press box.

Denver Post:  Avs chalk up their eight straight win at home.  Much like the Jets, the Avalanche have had to overcome a slow start, but 8 wins in a row at home is a move in the right direction.  Won’t be an easy game for the Jets who have been anything but road warriors this season (4-8-4 away from MTS Centre) but is an important test to see how they rebound following the Christmas break.

TSN:  Duchene scores late in OT as AVs edge Bolts.  The Jets, who themselves play a lot of close games, don’t want to get into a one goal contest with Colorado, who is 13-5-1 this season in one goal games.