Habs bad in any language. Gauthier better be next to get guillotine. Pavelec was solid and Jets had his back. Soaking it all up. Loud crowd helps Jets take off. Game recaps.

Next opponent news – Pittsburgh Penguins: Engelland suspended for 3 games and other Pens notes.

Note:  Stay tuned to IC as we will have Penguins and Jets audio today.

Winnipeg Free Press:  Habs bad in any language.  The Jets have dominated teams this season when the opposition is playing the 2nd game of a back-to-back (5 wins 0 losses).  The Canadiens are the latest victim of a hungry Jets team who needed to show some fight after a lackluster effort against the Islanders on Tuesday.  It doesn’t get any easier for Winnipeg however, as the 5th place Penguins are in-town riding a two game winning streak.

Winnipeg Free Press:  Gauthier better be next to get guillotine.  Hard to argue that he has left his coach blowing in the wind.  Personally if the Habs were riding a 5 game winning streak instead of a losing one, then I think we wouldn’t be hearing this from more than a tiny minority of Montreal fans but because of the team’s play, the mob is calling for someone’s head, and it doesn’t appear that the GM wants to stick his neck out. 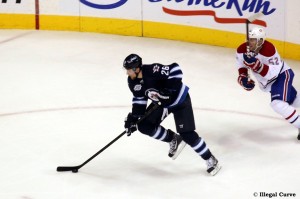 Winnipeg Sun:  Jets soaking it all up.  The Jets keep winning all these awards and they haven’t even made the post season yet.  This is clearly the most heart warming story in hockey and dare we say all of sports.

Pittsburgh Post-Gazette:  Loud crowd helps Jets take off.  As I left the MTS Centre late last night I bumped into a reporter from Quebec City who was marveling at the noise of the arena.  The guys from Pittsburgh also know that this building is legit.  Winnipeg has made quite a name for itself in the short time we have been back in the NHL.

Winnipeg Sun:  IceCaps melting AHL.  This has been one heck of a first half for the Jets farm club.  They still haven’t lost in regulation on the road (a trick the parent club could afford to learn) and despite having lost a number of players throughout the season to call-ups by Winnipeg, have managed to remain at the top of the AHL standings.

Pittsburgh Post-Gazette:  Pens Engelland suspended for 3 games and other Pens notes.  After a hit on the Hawks Marcus Kruger, he will be sitting for awhile.  Zbynek Michalek, who fell against the Jets back in October which led to Kyle Wellwood’s goal 8 seconds into the 1st back on October 17th and Winnipeg’s 1st victory of the season.  Thunder Bay’s Jordan Staal is operating at less than 100%.