5,000 more Jets licence plates to go on sale this week. If Wheeler shoots, he’ll score more. Crease-crashing Kane opportunity lost. Jets far too giving. Another missed opportunity. Warm welcome for the pride of St. Malo. Ladd’s stick, Buff’s skates could be yours. The ‘Peg is the place for Pavelec.

Winnipeg Free Press:  Crease-crashing Kane opportunity lost.  They failed to gain ground on the playoff teams, once again missing when they had an opportunity to slip into a playoff position.  The Jets just didn’t have it all night.  Without the brilliant play of Ondrej Pavelec the score easily could have been 5-1 for the Islanders. 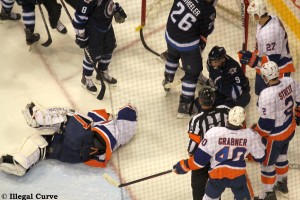 Winnipeg Free Press:  If Wheeler shoots, he’ll score more.  Wheeler’s pass first attitude has definitely been a boon to his line mates but he has a pretty decent shot and sometimes he needs to fire the puck on net and look for a rebound.  Too often he and his line are trying the “pretty plays” and they need to add a little dirty to their game. 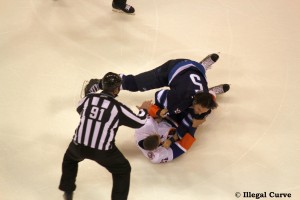 Winnipeg Sun:  Jets far too giving.  The Jets just didn’t have the jump against the Islanders that they needed and to give credit to the boys from Long Island, they played a great road game.

Winnipeg Sun:  Warm welcome for the pride of St. Malo.  It must have been quite the night for the nearly 100 friends and family of Travis Hamonic in the stands of the MTS Centre.  They saw him get an assist and make some big hits/plays.  They probably didn’t like when he limped off the ice in the 2nd period but he returned and played nearly 29 minutes. 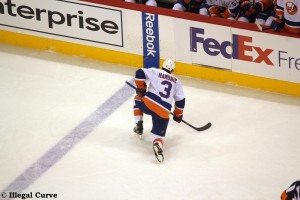 Winnipeg Free Press:  Ladd’s stick, Buff’s skates could be yours.  I’ve never been much of a memorabilia collector but something tells me these items, much like anything Jets related, will be a hot ticket item.

Cape Breton Post:  The ‘Peg is the place for Pavelec.  The former Cape Breton Screaming Eagle has been such a benefit to the Jets organization.  He is a workhorse that the team can rely on night in and night out.  Interesting speculation on Jets assistant coach Pascal Vincent, especially when you consider the Jets next opponent.

Montreal Gazette:  Cole not overly concerned about Cammalleri slump.  The Jets know a thing or two about players going into mini-slumps.

Montreal Gazette:  Habs have rich anglo history.  Only in Quebec can this become an issue, one that Cunneyworth would quickly overcome if he started to speak a language universally understood by all:  winning.

Winnipeg Free Press:  Habs and their language baggage coming to town.  The Canadiens coming to town is always a circus and this adds a new element.